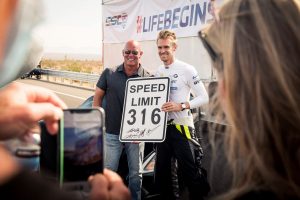 Back in October, the SSC Tuatara managed to hit a two-way average speed of 508.73 km/h (316.11 mph) and a Vmax of 532.93 km/h (331.15 mph) to become the world’s fastest production car. However, in the weeks since the company announced its achievements, people began analysing the footage of the speed run, with many saying that the video evidence didn’t back up the data.

While it might sound like a case of “haters gonna hate,” company CEO Jerod Shelby has now admitted that the onboard video couldn’t back up the top speed claims that was set on State Route 160 outside of Las Vegas near Pahrump. This is the same stretch where the previous record holder, the Koenigsegg Agera RS, made history in November 2017, giving the skeptics a point of comparison.

“We’re a small organisation. We don’t have a massive crisis team or crisis plan, so we didn’t form a defensive press statement and go back to the press immediately. What we did as a small group, we immediately requested the video files. We hadn’t possessed any of them yet, and we got our hands on a couple of them. And the first couple from the same run, we all of a sudden were seeing the same doubts,” said Shelby.

Speaking to Motor Authority, Shelby said that the record run’s data from October 10 will not be submitted to Guinness World Records, so the Agera RS still holds the crown for now. “I don’t believe Guinness would even review the submission due to all the controversy,” Shelby told the publication.

In a video statement, a pensive Shelby said his perfect view of the record “is now gone” and there was no way to salvage the “stained” attempt. “As I sat there thinking through, there was just no way to now make this perfect, it hit me. We have to re-run the record. We have to do this again, and do it in a way that’s undeniable and irrefutable,” he stated. Shelby goes on to say that the second attempt will be done “in the very near future” and that “multiple GPS companies’ equipment” will be put inside the car, with “their staff on site looking over our shoulder analysing every run, every detail.”

He also invited the few YouTubers that called out SSC to the run so they can witness the new record attempt first hand, alongside two independent third-party witnesses that are required as per Guinness World Record rules.

Shelby told Motor Authority that Guinness will not be on site for the next record attempt as the organisation doesn’t send its own people and relies on having two witnesses on site to certify the record. He also said it is yet to be determined who the driver will be and when the next run will take place.