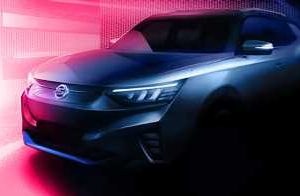 SsangYong has begun teasing its first-ever electric vehicle ahead of an official debut in its home market set for the first half of 2021. Currently known by the codename “E100,” the EV is based on the Korando compact SUV, which debuted in 2019 and was initially offered with petrol and diesel internal combustion engines.

Based on the two images provided by the Korean carmaker, the E100 gets a few design changes compared to the ICE-powered Korando. The most obvious is the closed radiator grille that is often associated with EVs, which sports the brand’s Korean-market logo in the middle. Other differences include a new bumper that is also mostly closed off, with additional creases in the lower apron for a more aggressive look. The company also says the bonnet is made of aluminium to save weight and lower the car’s centre of gravity, while a biomimetic approach was taken to minimise air resistance. This includes utilising shark fin and riblet shapes for various parts of the exterior.

According to an earlier report by Auto Express, the Korando-based EV will feature a single electric motor rated at 191 PS (188 hp or 140 kW), with power supplied by a 61.5-kWh battery supplied by LG Chem. This setup is said to provide a range of up to 420 km on the NEDC test cycle, along with a modest top speed of 153 km/h.