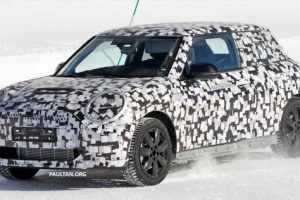 MINI is transitioning to become a brand for fully electric vehicles by 2030, and the final internal combustion-engined model to emerge from the brand will do so by 2025. This development mule photographed here is a part of that future, as beneath the headlamp rings, tail lamp assemblies and air intake decoys is the next-generation MINI Cooper EV, its powertrain denoted by the ‘Electric Test Vehicle’ stickers.

That means the next-generation MINI hatchback will also be the last internal combustion model to come from the brand, as MINI will play a “pioneering role” in the electrification plans for the wider BMW Group, for which a new electric vehicle architecture is being developed, and likely to be the basis of this development mule photographed here.

A brief glimpse into the test mule’s cabin reveals that the next-generation car will sport a large digital display arrangement, apparently doing away with the circular instrument housings that have been an integral look of the MINI cabin. We can expect to get a better look at the car inside and out as future development units emerge for road tests. The new-generation underpinnings can be expected to improve upon the outputs of the current-generation MINI EVs, such as the Cooper SE that outputs 184 PS and 270 Nm of torque, drawing electricity from a 32.6 kWh lithium-ion battery pack that offers a range of up to 234 km on the WLTP cycle.

The next-generation MINI EV model is still in its early stages of development, which leaves plenty to be told until its debut. There will still be petrol-powered MINI models, because as mentioned at the beginning, there is still a few years to go before the internal combustion line is drawn for the MINI brand.

MINI now represents one end of the powertrain development spectrum for the wider BMW Group, as the BMW brand has asserted its commitment to future development of internal combustion engines via tweets by BMW CEO Oliver Zipse, who said that the brand has not plans to stop developing ICEs “because demand will remain robust for many years to come.”

This contrasts with plans announced by its compatriot Audi, when its CEO Markus Duesmann stated that it will no longer develop new internal combustion engines, and instead will continue to adapt its existing engine families to ever-tightening emissions regulations.