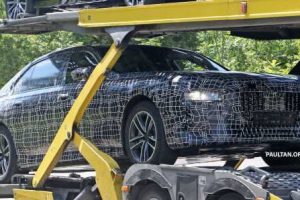 The forthcoming electric flagship from BMW has been spotted in public again, this time in what is possibly the production form of the i7. Previously sighted late last year in G11/12 bodywork, a closer look at the latest iteration of the development car reveals several protrusions on its bodywork which could be for sensors and cameras.

The front end certainly appears to be a departure from the present 7 series styling, though this is very much a work in progress with more to be revealed in due time. What is apparent on its front end, however, is the presence of what looks like a sensor or camera window above the kidney grille, along with a bulge on each front quarter panel, each concealed beneath the foil for what may be rearward facing cameras.

The shark-fin antenna on the roof of this development vehicle also appears to house a rearward-facing camera, and our sources suggest that the significant number of cameras present points to a step up in autonomous driving capabilities for Munich’s next flagship.

Powertrain for the i7 – should this be its eventual name – will come courtesy of BMW’s fifth-generation of eDrive power units, the most recent example being the recently launched iX3 SUV. Earlier reports suggested that the next flagship from Munich will start with a battery pack of 80 kWh capacity, and range up to 120 kWh or more for a maximum range of up to 700 km.

The myriad combinations possible with battery pack sizes and drive motors could yield at least two variants of the i7, possibly a base-model i7 and a more potent ‘i7s’, in a similar vein to the format adopted by the smaller i3.