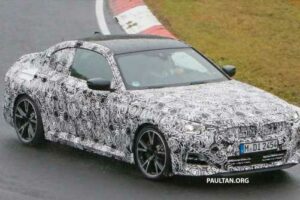 Following on from its earlier sighting during cold-weather testing, the next-generation BMW 2 Series Coupe has been spotted by our spy photographers once more, this time on two separate occasions at the Nurburgring and near BMW headquarters in Munich, respectively.

The forthcoming compact coupe will be based on the Cluster Architecture (CLAR) underpinnings which currently form the basis for models like the G20 3 Series, through the G30 5 Series to the G11/G12 7 Series, which means the 2 Series Coupe will continue to be of a RWD, longitudinal engine layout, and likewise suggested by its overall proportions similar to those of the current car.

While the camouflage foil remains, we now get a better look at the shapes on the front end of the car that will see production, the removal of shrouds atop the brand’s signature kidney grilles indicating that these will be of a relatively normal size on the upcoming 2 Series Coupe. More of the front bumper’s shape can be seen, the intakes here wearing similar shapes to those on the M340i for the car sighted on the Nurburgring. This will therefore likely be the M240i or equivalent 3.0 litre inline-six-engined model, as also suggested by the dual trapezoidal exhaust outlets; the B58 engine produces 374 PS and 500 Nm of torque in the G20/21 M340i xDrive sedan and station wagon.

The unit spotted around Munich appears to be from the regular 2 Series range, with a seemingly less aggressively styled front bumper, and dual round exhaust outlets at the rear end. Here,

Those hoping for a full-on M car in this relatively compact body will be glad to know that the next-generation M2 is confirmed, replete with the S58 biturbo inline-six from the M3 and M4. This is been rumoured to start in base M2 form with around 426 hp, and is also rumoured to be joined by a four-door for the first time in the form of the M2 Gran Coupe.