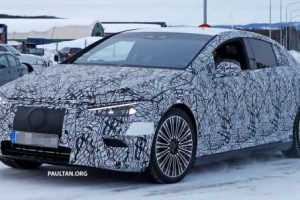 The all-electric Mercedes-Benz EQE has been sighted running road tests once again, and it now appears that the second model to be based on the German manufacturer’s MEA modular electric vehicle platform has done away with its plastic disguise, leaving just the foil to hide what’s likely to be its production body.

Codenamed V295, the EQE will be all-wheel-drive thanks to two electric motors (one on each axle) like the larger EQS, and the MEA platform enables a flat floor structure that maximises interior space. While early information suggests that the EQS powertrain with more than 470 hp and 750 Nm of torque, whereas the EQE is likely to get slightly detuned outputs.

On the outside, the EQE uses a slightly different position for its side mirrors compared to the EQS, while the rear end shows a third brake light that is integrated into bootlid rather than located at the rear windscreen as on the EQS. Meanwhile, the bootlid itself is for a regular trunk configuration rather than the liftback tailgate on the full-sized model in the range. Key differences between the EQE and the EQS continue to be visible when viewed in profile, as the EQE wears a more upswept window line at its rear doors. At the front end, the headlamps on the EQE appear to be mounted slightly lower compared to those on the EQS.

This is only the beginning for model line, as the EQE – along with the EQS – will be getting AMG-tuned variants that could get more than 600 PS in peak output, with a minimum of two motors. The Tesla Model S Plaid features tri-motor electric powertrain.

With the EQS set for debut in 2021, the EQE is due for its introduction this September according to our sources, while their SUV equivalents – the EQS SUV and EQE SUV – are also in the works.