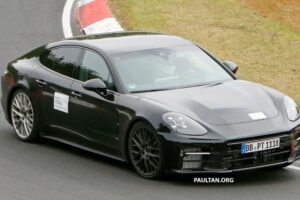 The 971-generation Porsche Panamera received its facelift last year, bringing powertrain and equipment updates along with sparingly revised exteriors. These images here depict prototypes with bodywork which have been slightly revised once again, photographed on separate occasions on the Nurburgring Nordschleife and elsewhere in Southern Europe, according to our source.

This may well be a second facelift for the 971-generation model range, as the exterior revisions are suggested to be joined by an updated interior as well, as depicted in the accompanying images.

The development cars photgraphed in this set wears a front bumper that now features sharper lines with more squared-off edges and intakes, where the centre section takes on a more unified, singular opening that extends upwards to the upper edge of the bumper, whereas that on the current car ends at the license plate. The rear ends of the two development cars photographed in this batch are also mostly similar save for the exhaust outlet assemblies, with the car at the Nurburgring seen with the rectangular outlets and the road-testing unit fitted with quad rounded tailpipes.

The aforementioned updates to the Panamera’s interior suggest that Porsche is aligning the fastback four-door with the update route taken by the Macan, which has made its second facelift debut last month. Not a whole lot is clearly visible from the image of its interior, though the current steering wheel design as premiered on the 992-gen 911 and Taycan can be expected here.

Beyond the development vehicles photographed here, our sources have heard from a Porsche insider that the German manufacturer is working on a performance flagship variant to sit atop the Panamera range, in the vein of the Turbo GT that crowns the Cayenne line-up.

The 4.0 litre biturbo V8 from its Cayenne Turbo GT produces 640 PS and 850 Nm of torque, and assuming the same outputs are used in the Panamera, a slightly lighter vehicle should mean minor improvements on the top Cayenne’s 0-100 km/h time of 3.3 seconds.