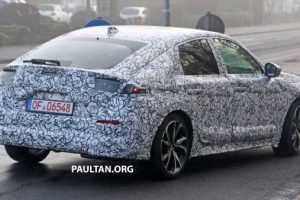 The new 11th-generation Honda Civic moving ever closer to production, with the H brand having already revealed a prototype that is pretty much representative of what you’ll be able to buy. That car was a sedan; now, our spy photographers have caught the hatchback version making the rounds in Germany.

As you’d expect, the five-door is mostly similar to the prototype, with a low and wide front end that ditches the “Solid Wing Face” chrome bar of the outgoing model. The leading edge of the bonnet also now runs independently of the headlights and grille, while the A-pillars have been pushed rearward to improve visibility in concert with the new door-mounted side mirrors.

It’s only at the rear where you’ll find the main difference between hatch and sedan. The sweeping roofline has been retained, but the boot is shorter and the clear taillights have been pushed upwards to be in line with the rear windscreen. Obviously, there’s also a large tailgate, complete with the obligatory rear wiper. Of course, we already know what the new Civic Hatchback will look like, thanks to patent images that surfaced in September. It will bear closer resemblance to the sedan this time around, sharing the rear doors and losing the prominent rear haunches of the current model. The car will also get a full-width taillight design thanks to an extra strip joining the main lamps, ditching the split windscreen in the process.

With the new Civic, Honda is claiming improvements in safety, refinement, handling and ride comfort. No powertrain details have been revealed just yet, but the company is promising more powerful and fuel-efficient engines, possibly paving the way for a hybrid variant that was missing in the previous generation. Expect the ubiquitous 1.5 litre VTEC Turbo engine to soldier on with increased outputs.