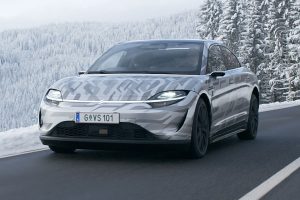 Electronics stalwart Sony has no plans to put its Vision-S electric vehicle concept on sale or even into mass-production, it has told Car and Driver, despite the car appearing to be very near production readiness and already put forth into testing on public roads in Europe.

This is because the Japanese electronics maker sees a reality for the Vision-S that is to be a test bed for forthcoming Sony technology to ensure that the company is part of the “era of autonomous driving,” it told the magazine.

“Through our strengths in imaging and sensing, we aim to contribute to both safety and reliability in autonomous driving, while also delivering a powerful experience leveraging entertainment in the mobility space,” a Sony spokesperson said, indicating that its contribution to developments in the autonomous driving realm are related to in-car entertainment.

On this front, Sony describes the inclusion of 360 Reality Audio, says Car and Driver, a system which creates an audio sphere around the heads of the car’s occupants by way of speakers within the headrests for each seat. In the longer term, the goal is to add a PlayStation console with a 5G connection to enable online gaming within the Vision-S, said the report.

Since its first unveiling at CES 2020, the Sony Vision-S has increased its sensor count from 33 to 40, the 2021 revision adding a new rear lidar sensor and an interior camera to monitor the driver’s lips, improving speech recognition. Software upgrades will allow for self-driving at Level 4 and above in the future, Sony said at the car’s original CES 2020 debut.

Built by development partner Magna Steyr, the all-electric concept vehicle enables the testing of its technologies in an environment fully controlled by Sony, and because it isn’t using another automaker’s existing electronics hardware or software, it does not have to compromise based on what is currently available on the market, and therefore is subject to fewer limits around what it can achieve, the report said.

The Vision-S made its debut with powertrain specifications comprising a dual-motor setup totalling 536 hp in total system output, enabling a 0-100 km/h time of 4.8 seconds and a top speed of 240 km/h. Suspension comes courtesy of air springs on a double wishbone setup at both ends, with 21-inch wheels shod in 245/40 and 275/35 tyres front and rear.

Sony plans to continue to test and share its progress as it develops the Vision-S, Car and Driver quoted a spokesperson as saying. It’s a curious direction taken by a firm that has, on the surface, said that it doesn’t intend to mass-produce and sell this fully-electric, autonomous-capable vehicle, don’t you think?