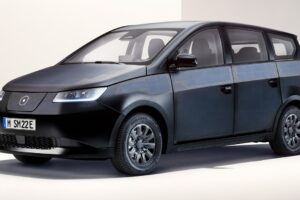 Solar-powered cars aren’t just a pipedream according to German start-up Sono Motors, because this is the firm’s new Sion and it could reach customers as early as next year. Sono has been working on the Sion from 2017 onwards and since then has totalled over 19,000 reservations made up of deposits averaging 2,225 Euros (£1871).

Helping to generate power for the Sion are 456 solar ‘half-cells’ that are incorporated into most of the body panels. The only panels that don’t feature the solar cells are the front and rear bumpers. Sono says these cells will extend the Sion’s estimated 190-mile range by an average of 70 miles per week.

The Sion’s battery is a 54kWh unit which is charged by either the solar energy captured by the cells or through a charger that offers speeds up to 75kW. The battery is able to divert energy to power electronic devices and even other electric cars with an output up to 11kW.

The Sion is pitched as a family-friendly MPV and compared to previous concepts we can see new headlights and rear lights, cleaner surfacing down the side, new bumpers and a charging cap at the front. It’s an angular exterior design mixed with a minimalistic interior. Inside there are two screens on the dash and an unusual foggy screen underneath. Elsewhere the cabin looks fairly conventional, despite the atypical powertrain.

The car was unveiled at the first “Celebrate the Sun” event in Munich alongside Sono’s other creation – a ‘Solar Bus Kit’ which is a retrofitted solar panel kit that can be added to existing buses to power things such as the air conditioning and electrics.

Harness the power of the sun with these solar-powered chargers…