Someone Set A Nürburgring Lap Time In The BMW i3s, Watch POV Video 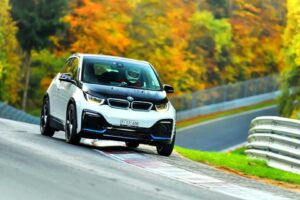 The BMW i3 is not the first electric vehicle you would pick to do some laps on the Nürburgring Nordschleife. Not even the go-faster BMW i3s model would make the list, so why has someone decided that this was a good idea?

Well, why not? Stefan, the guy driving the BMW i3s on the Nürburgring in this POV video, was aware that the electric city car is not exactly a track tool. He describes the i3s as a cool everyday car for someone who drives short distances and wants to be a little “sporty” on the road. That said, he was curious to see how BMW’s electric warm hatch would perform on the world’s most punishing test track.

Now, before we delve into the lap, it’s worth refreshing our memory with the BMW i3s’s specifications and performance. The small EV features a rear-mounted electric motor delivering 181 horsepower (135 kilowatts) and 199 pound-feet (269 Nm) of torque, which is enough for a 0-60 mph acceleration in 6.8 seconds and a top speed of 99 mph (160 km/h).

Those are hardly prerequisites for a Nürburgring lap record for production EVs; while the acceleration is decent and comparable to a VW Golf GTI, the low top speed is a major disadvantage for the i3s. However, since this model featuring wider tires, lower ride height and stiffer suspension tuning than regular BMW i3 models, it’s clearly the pick of the range if you want to see how an i3 performs on the “Green Hell.”

So, how did it go? Stefan says the 42.2 kWh battery ran out of juice after only three laps—one lap of the Nordschleife measures 12.9 miles (20.8 kilometers) in Bridge to Gantry configuration—and that after covering about one mile he felt the vehicle was delivering only half the power.

Rather surprisingly for a rear-wheel-drive car, he found the BMW i3s has a tendency to understeer; he didn’t manage to send the rear end into a slide, not even when trail braking. He also advises people who might want to take their i3s to the Nürburgring that “curbs should only be approached lightly” as they can unbalance the car.

Other negative aspects he noticed were the overly protective ESP system and the slow top speed. Driving the BMW i3s on the track’s high-speed sections “felt like an eternity.” As for the good stuff, he describes the i3s’s chassis as “amazingly good” and says the brakes worked surprisingly well, mostly due to the regenerative braking system.

The BMW i3s achieved a lap time of 10 minutes and 8 seconds, which is ages away from the current lap record for production EVs of 7 minutes and 33 seconds achieved by the Porsche Taycan Turbo S earlier this year. It’s also slower than pretty much every vehicle that was officially timed on the track, but did anyone really expect otherwise?