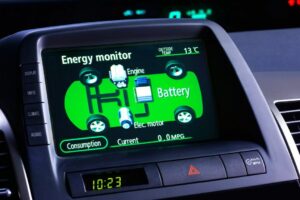 Vehicle Excise Duty (VED) – more commonly known as road tax – is a tax on car ownership and use. It is partly based on CO2 emissions and is intended to encourage motorists to choose efficient cars that do not pollute as much.

The more a car pollutes, the more road tax the driver will have to pay.

Fully electric car owners are exempt from paying VED as they are “zero-rated”.

As of now, this only applies to cars with no combustion engines at all.

However, drivers who opt-in for hybrid cars can also avoid paying the charge with a clever trick.

The current VED law came into force on April 1, 2017, and seemed to target hybrid car owners the most.

But, that’s not the case for hybrids that have been registered before then.

Cars registered between March 1, 2001 and March 31, 2017 fall under a previous tax system, which heavily favours electric vehicles and hybrids.

Importantly, there are no flat fees, with owners of less polluting cars paying lower rates.

If motorists are looking to buy a hybrid vehicle, it is therefore worth checking when the car was registered.

Hybrids registered before April 1, 2017 are fully tax-exempt, as long as they emit less than 100g/km of CO2.

The pre-2017 tax system scales up depending on the CO2 emissions, and while there aren’t that many hybrids that emit more than 100g/km, it’s only the most polluting models that have a significant tax cost.

Since April 2017, when the Department for Transport (DfT) last overhauled the UK’s road-tax system, there has been a flat rate for all types of cars.

This has made it tougher for drivers of low-CO2 cars to avoid tax, while there’s also additional tax to pay on expensive cars (those priced at more than £40,000 new).

Electric and hybrid cars were priorities in this revision.

The rules were changed again in April 2020 – albeit to a lesser degree.

Before this date, electric vehicles costing more than £40,000 were liable for an annual road-tax surcharge the first five times the tax was renewed.

But all electric cars are now exempt from all VED costs, no matter their original list price.

All cars have an initial road-tax cost that can go all the way up to £2,365 for the most polluting models.

After April 1, 2017 non-hybrid petrol and diesel cars costing less than £40,000 are subject to a flat VED rate of £165 a year from the second time the vehicle is taxed.

Hybrid and plug-in hybrid models (and even mild hybrids) are classed as “Alternative Fuel Cars” and get a £10 discount on that rate, which means the annual fee for those models is £155 (for sub-£40,000 cars).

That means an annual fee of £520 for conventionally fuelled vehicles and £510 for hybrids (including plug-ins).

Motorists should note that this means the cost of road tax is zero, not that they don’t have to tax their car.

They still need to go online or phone the DVLA to tax their car, even though it costs £0.