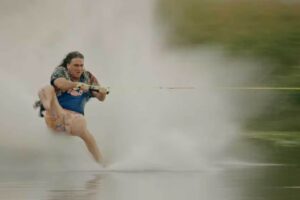 Formula 1 is headed to Miami in a few short weeks, and for as wild as an F1 race in one of the hottest cities in America surely will be, it has some stiff competition with Oracle Red Bull Racing’s theatrical hype video it just released for the run-up to the race. We’ll let you watch the rest of the 11-minute video “Race to Miami” on your own, which sees driver Sergio “Checo” Pérez misunderstand a phone call with team principal Christian Horner and attempt to drive from New York City to Miami in his RB race car. But let us point you to the juiciest part, which starts around the 4:33 mark and involves pro wakeboarder Parks Bonifay, that RB18 race car, and the Florida Everglades.

Bonifay pops up to diffuse a whimsical interaction between an alligator and Pérez’s car, and in an effort to show the F1 shoe the way to the Miami Autodrome, where the grand prix is being held, he proposes he give him more hands-on directions. The scripted meetup then breaks off while Bonifay hooks up a line to the back of the F1 car, which promptly takes off, yanking the wakeboarder along the water adjacent to the (dirt) road Perez is on. The best part? Bonifay is barefoot. Barefoot water-skiing behind an F1 car.

While there’s an obvious Florida man (men?) joke to be made here, given the utter zaniness of what Red Bull Racing’s media team came up with, it’s also an incredibly cool stunt in a goofy hype video filled with cheeky high-profile cameos from Florida’s sports and action sports scenes.

Plenty of behind the scenes and highlights clips have been posted to social media, too—including a long video on Bonifay’s YouTube channel—so hit up Instagram, Twitter, and elsewhere to check them out.