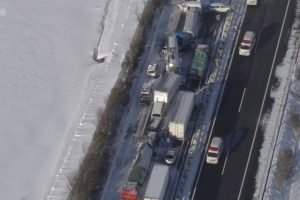 Sadly, one person died in the collision.

Winter weather can be cruel for motorists, and sadly, it can sometimes lead to tragedy. That’s what happened recently in Japan, where a snowstorm driven by 60-mph winds caused slippery conditions and near-zero visibility on a major highway. It led to a huge collision of 130 vehicles in which one person died.

The storm struck Japan’s Miyagi Prefecture in the northern region of Honshu island, about 250 miles north of Tokyo. The area is forecast to receive upwards of 15 inches of snow through Wednesday, but high winds and poor visibility on the Tohoku Expressway led to the pile-up by noon local time on Tuesday. According to the BBC, weather conditions had already forced a speed limit reduction to 50 km/h (31 mph) in the area but judging by the damage seen in the video above, at least some vehicles were still traveling much faster.

If there’s any good news, it’s that many of the vehicles seen in the video appear to be damage-free and are merely caught in the jam. Some vehicles have light damage, but several are clearly totaled. 10 people were injured in addition to the single fatality mentioned previously. Considering approximately 200 people were affected, it could’ve been much worse.

It’s a stark reminder of how quickly things can go from bad to very bad in a short amount of time. A major storm last month in Japan stranded upwards of 1,000 people on a snowbound highway for two days, and recent storms in the US have slammed both the East Coast and southern states as far south as Austin, Texas.

We still have two solid months of winter in the northern hemisphere, so stay safe out there everyone.