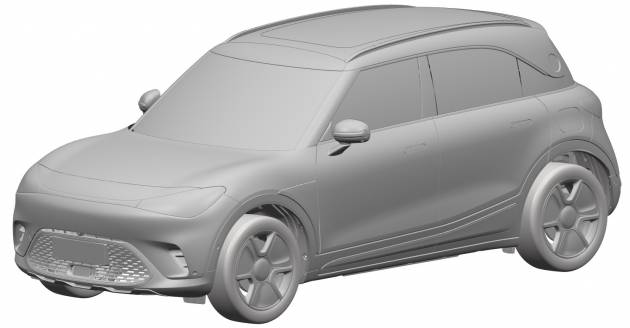 At the Munich Motor Show last month, smart revealed the Concept #1, presaging its first new model developed in partnership with Geely. We now know what the production model will look like, thanks to a design trademark filed with the European Union Intellectual Property Office (EUIPO).

The electric compact SUV you see here is very clearly inspired by the show car, with the smooth jelly bean-like design being recreated rather faithfully. Clear to see here are the slim full-width head- and taillights, clean bodyside surfacing and the in-vogue “floating roof” design with an inset D-pillar smart badge.

There are a few changes, however. The downturned lower grille has larger holes (presumably for greater airflow) and incorporates a radar sensor for its driver assistance functions, while a pair of slim air inlets have sprouted on either side. The leading shutline for the clamshell bonnet is also now positioned slightly behind the headlights, aligned with the front bumper. 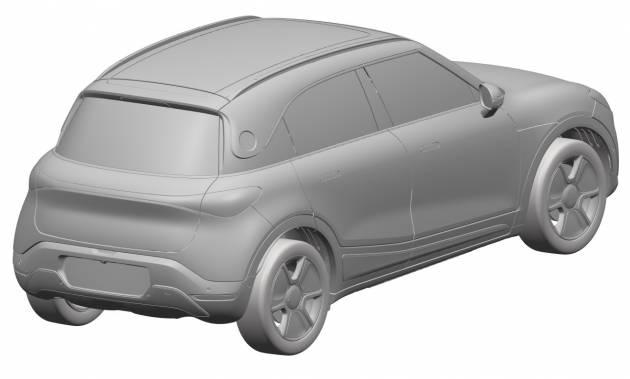 Elsewhere, there are larger door-mounted side mirrors, a reshaped rear number plate recess, smaller six-spoke (more like three big spokes) alloy wheels, actual B-pillars and pop-out door handles placed in their normal positions. The last two make it clear that the production model will feature conventional doors instead of the suicide versions on the Concept #1.

As previously mentioned, the still-unnamed crossover will be the first product of a joint venture between Mercedes-Benz and Geely, the latter purchasing a 50% stake in smart. While the former will continue to design the new electric vehicles, the latter will take up the development of the mechanicals, with the SUV already confirmed to be based on the Chinese carmaker’s new Sustainable Electric Architecture (SEA).

The new JV company is headquartered in Hangzhou Bay in Ningbo, China (as the patent entry states) near Geely and will build cars in a purpose-built facility in the Middle Kingdom. No technical details have been revealed yet, but Geely has already confirmed that even the smallest battery offered on the SEA2 platform – on which the smart SUV will be based – will be capable of a range of about 450 km.