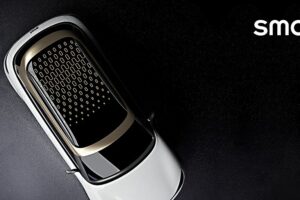 First teased in May, smart’s new electric SUV concept has been shown again ahead of its world premiere at the Munich Motor Show in September. This time, we get a good look at the top of the car, having seen a bit of the front and sides.

The sole image reveals the expansive glass roof, covered in a pill-shaped motif and framed by silver rails. We also see the gold cant rails that incorporates the windscreen header and runs down the D-pillars (where it ends with the smart logo), plus the wraparound windscreen design and the full-width head and taillights.

The new SUV is the first product of the joint venture between Daimler and Geely, with the latter handling the development of the future models and Mercedes-Benz continuing to be responsible for the design. The brand’s styling is still led by Stuttgart’s chief designer Gordon Wagener, who told Auto Express that the car is supposed to look “cool, sexy and grown-up instead of cute and playful.” Evidently, this meant ditching several iconic smart design cues such as the visible tridion safety cell and the large head- and taillights. The move to an electric architecture should also free up plenty of interior space. “Just like the current smart models, the first car of the new era will also offer a better ratio of length to interior space than conventional vehicles,” Wagener said.

The production version of the show car is expected to ride on Geely’s Sustainable Experience Architecture (SEA), which spans several variants to cover different market segments and already underpins the larger Zeekr 001. The platform is also expected to form the basis of Volvo’s forthcoming entry-level SUV. Expect the smart SUV to ride on the mid-range SEA2 for B- to D-segment vehicles, which has a wheelbase range of between 2,650 mm and 2,900 mm. Given that the car is set to compete with the MINI Countryman, it should figure around the lower end of that range.

While the unnamed model will be smart’s first production SUV, it won’t be the company’s first attempt at building one. Way back in the mid 2000s, the brand was developing the formore in a bid to expand the lineup after the launch of the original forfour. Mercedes decided to kibosh that car in 2005 as part of a restructuring.