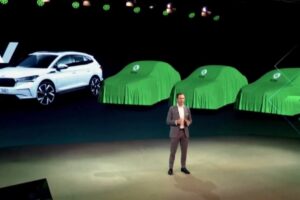 Skoda has presented its new transformation roadmap for the future, which lays out a series of goals to ensure the company’s success. Among the key targets mentioned in the “Next Level – Skoda Strategy 2030” plan is for the Czech carmaker to be one of the five best-selling brands in Europe by 2030.

The strategy focuses on three top priorities, starting with “Expand,” which will see more models being launched to strengthen the brand’s position in the entry-level segments. Given the push for electrification in many markets, most notably Europe, Skoda says it’s electric vehicle portfolio will be expanded to include three more models.

The brand’s first EV was the Citigo-e iV (a reskinned Volkswagen e-up!) but that model has since been discontinued. The current EV line-up now consists of the Enyaq iV, which is the sister model to the ID.4, and will soon be joined by a coupe-like version similar to the ID.5.

The sleeker Enyaq iV (rumoured to be called the Enyaq GT) is not one of the three upcoming EVs mentioned. Instead, the company stated that the future EVs slated to arrive by 2030 will all be positioned below the Enyaq iV, both in terms of price and size. Skoda is aiming for a share of fully electric models of 50-70% in Europe, depending on market developments. The company didn’t go into specifics, but one of the EVs is expected to be a small hatchback, while another is rumoured to be in the same segment as the Octavia. These EVs will likely adopt technologies developed by parent company Volkswagen Group, specifically the Modular Electrification Toolkit (MEB) architecture.

On that note, Skoda wants to make its home country of the Czech Republic into an electromobility hub, with production of EVs and related components taking place at the company’s plants in Mladá Boleslav, Kvasiny and Vrchlabí by 2030. High-voltage traction batteries are already being produced for the Superb iV and Octavia iV, and the company will add MEB battery production in Mladá Boleslav for the Enyaq iV at the beginning of next year.

Moving on to the “Explore” priority, Skoda intends to establish itself as the leading European car brand in the in the growth markets of India, Russia and North Africa by 2030. to generate global sales of 1.5 million units per year. An example of this initiative is the debut of the Kushaq in India (the first Skoda model to be launched there), which will also be rolled out to other markets. Lastly, the third priority, “Engage,” contains goals to simplify the user experience further, while refining the buying process so that one in five Skodas are sold online as early as 2025. On a larger scope, the company aims to reduce its fleet emissions by more than 50% compared to 2020 and will be manufacturing vehicles with net-zero carbon emissions at all Czech and Indian plants from 2030 onwards.

The Czech carmaker will also promote the training and further education of its employees, and will be investing almost 500 million euros between 2022 and 2030, with the primary goal of safeguarding jobs for the future.

Other tidbits from a Q&A session following the roadmap presentation include confirmation that a Fabia RS is not happening as it will be difficult for the company to build a business case for a hot hatchback. Meanwhile, the Superb will continue to be offered in liftback and wagon body styles, while there are no plans to enter the United States market.