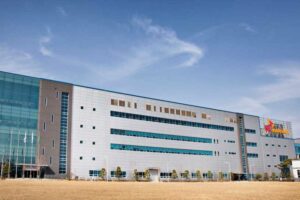 Later this year, the battery business will be split off.

The lithium-ion EV battery business (one of the largest globally) expands quickly and according to the official announcement will be split off from SK Innovation in October 2021. Previously, LG Chem similarly split off its battery business into a wholly-owned subsidiary LG Energy Solution (poised for an IPO).

“SK Innovation held the board of directors (BOD) meeting led by Chairman Kim Jong-hoon on the 3rd and decided to spin off its battery and E&P businesses, after announcing that these two businesses have been fully recognized for their growth potential and competitiveness. The spin-off decision was based on the necessity to enhance SK innovation’s corporate value. Following this, the extraordinary general meeting will take place for approval of the matter on September 16th, and the new tentatively named companies “SK Battery Co., Ltd.” and “SK E&P Co., Ltd.” will officially come to existence starting October 1st.”

SK Innovation’s corporate structure (Before and After the upcoming spin-off): 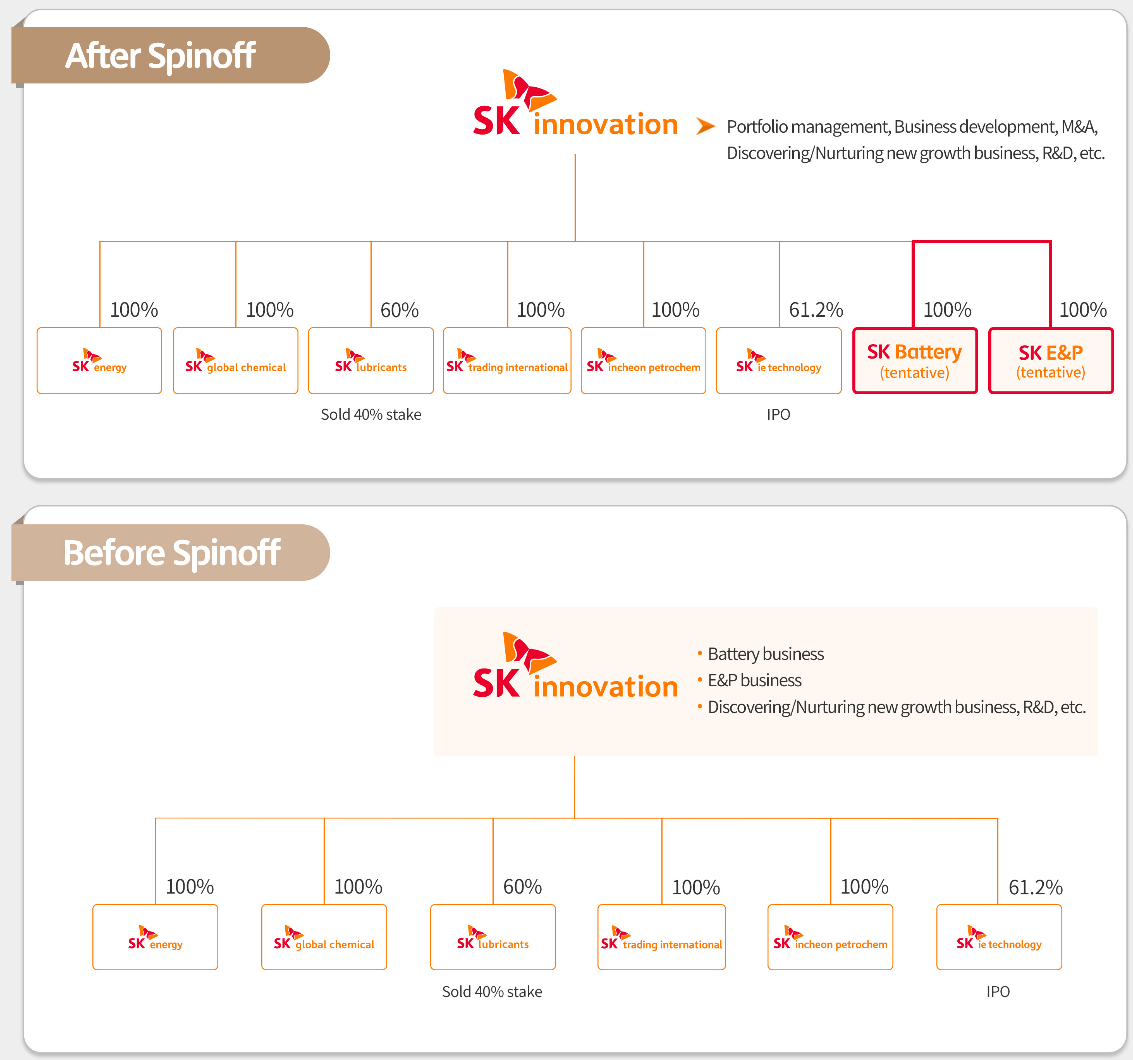 In the second quarter of 2021, the company as a whole was profitable: 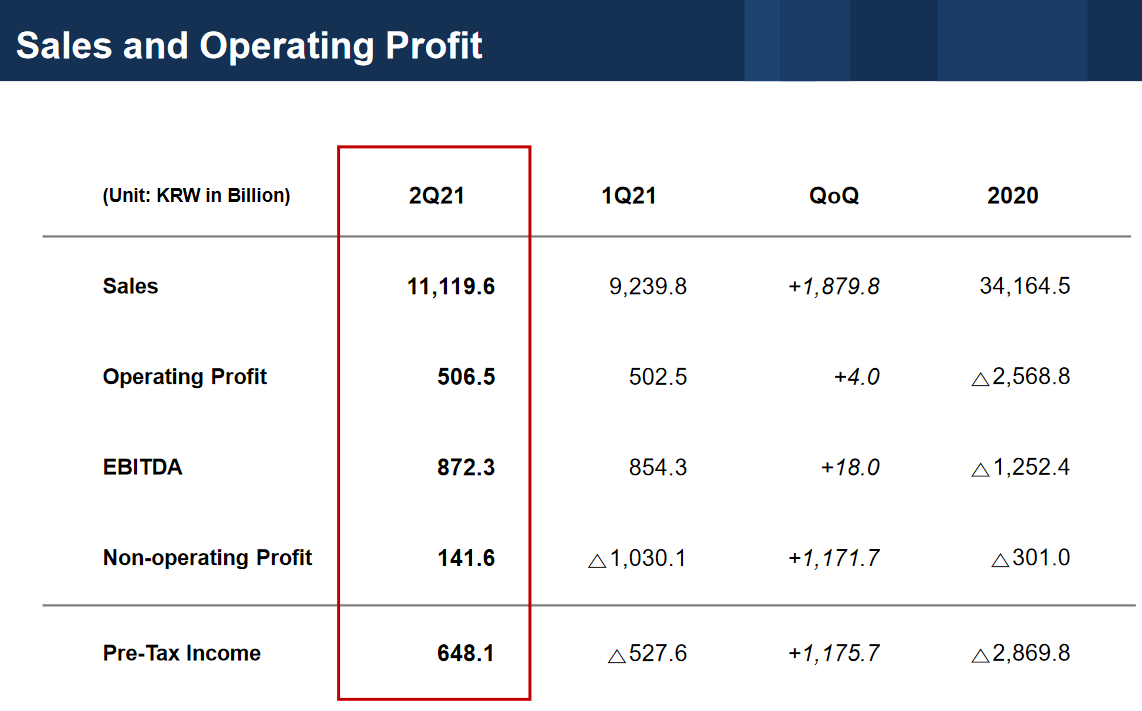 The battery business, included in the category named “Other,” remains only a small part of the entire company, but it’s expanding. A good sign also is that the losses decreased. 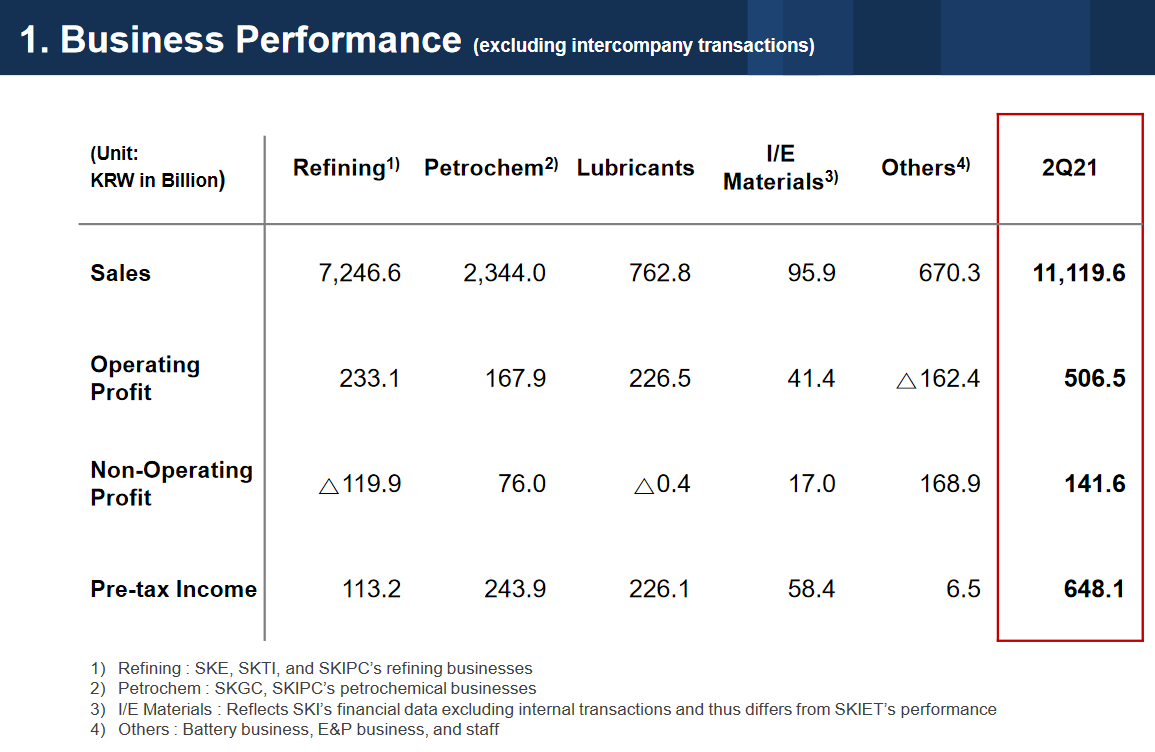 In the second quarter of 2021, SK Innovation increased battery sales by about 86% year-over-year. It remains unprofitable, but the operating margin of negative 16% is much better than before.

The company explains that it’s because of the volume deliveries of batteries for the Hyundai Ioniq 5 and the early stabilization of new plants.

“Battery business recorded KRW 630.2 billion of revenue, an increase of about 86% compared to the same period of 2020 (KRW 338.2 billion) thanks to the expansion of new sales volume. This record follows KRW 523.6 billion in Q1, which means for two consecutive quarters, battery business has exceeded the KRW 500 billion sales record. Also, after surpassing KRW 144.3 billion won the fourth quarter of 2018, it broke a new quarterly ales record with more than KRW 600 billion this quarter.” 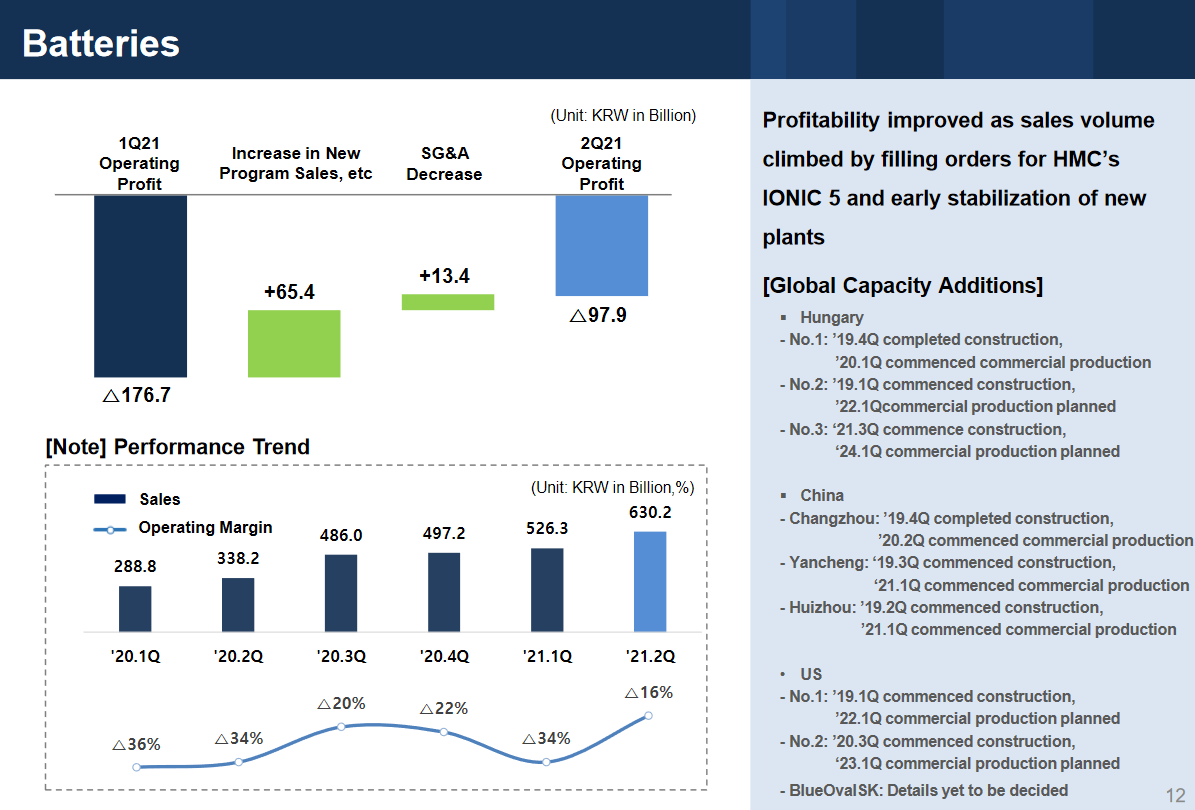 Profits are expected next year:

“Accordingly, the annual operating profit in 2022 for SK Innovation’s battery business is expected to be a surplus. Then with the quick recovery of the operating profit margin starting from 2023, the company expects to keep high single-digit profit from 2025.”

SK Innovation is investing heavily in the new battery plants – in Europe, China, and the U.S. The company intends to increase its annual battery cell output from about 40 GWh this year, to over 500 GWh by 2030: 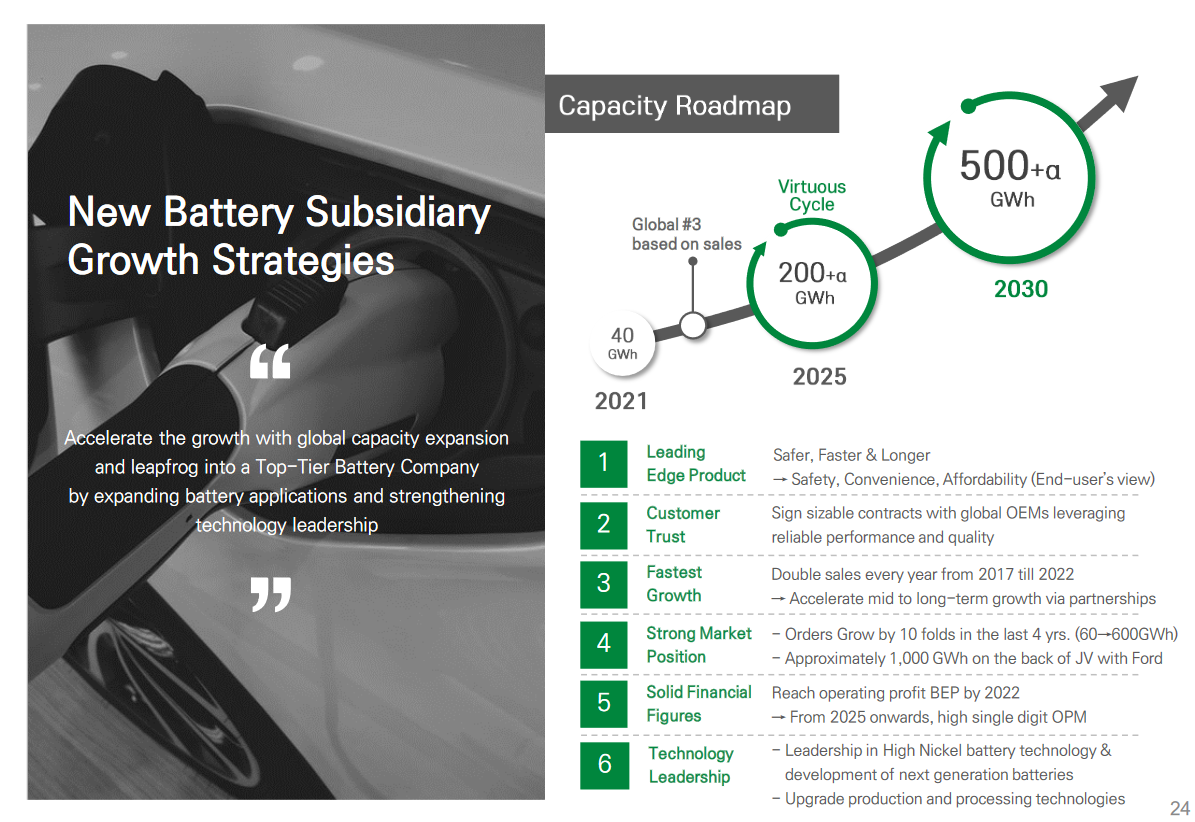 As we can see on the map, the main expansion will be in the U.S. (22 GWh under construction and 60 GWh announced), which shows how painful the ban would’ve been without the settlement with LG Chem’s LG Energy Solution. 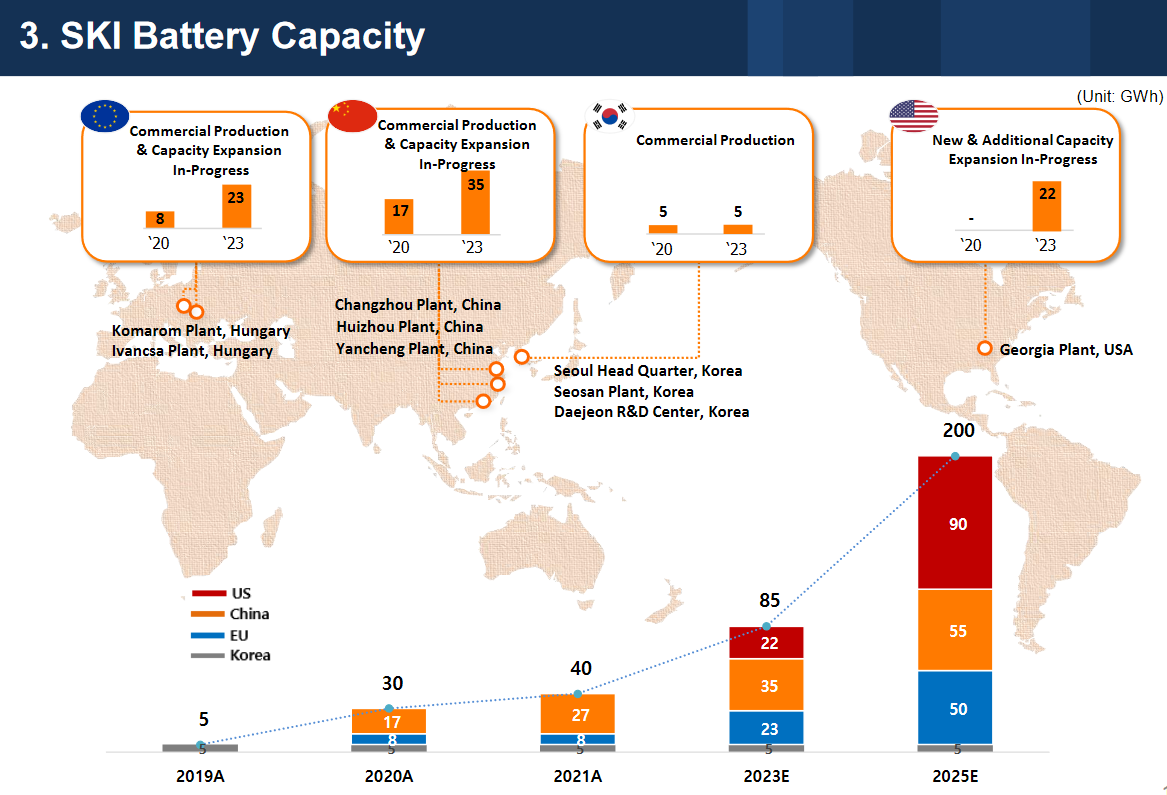 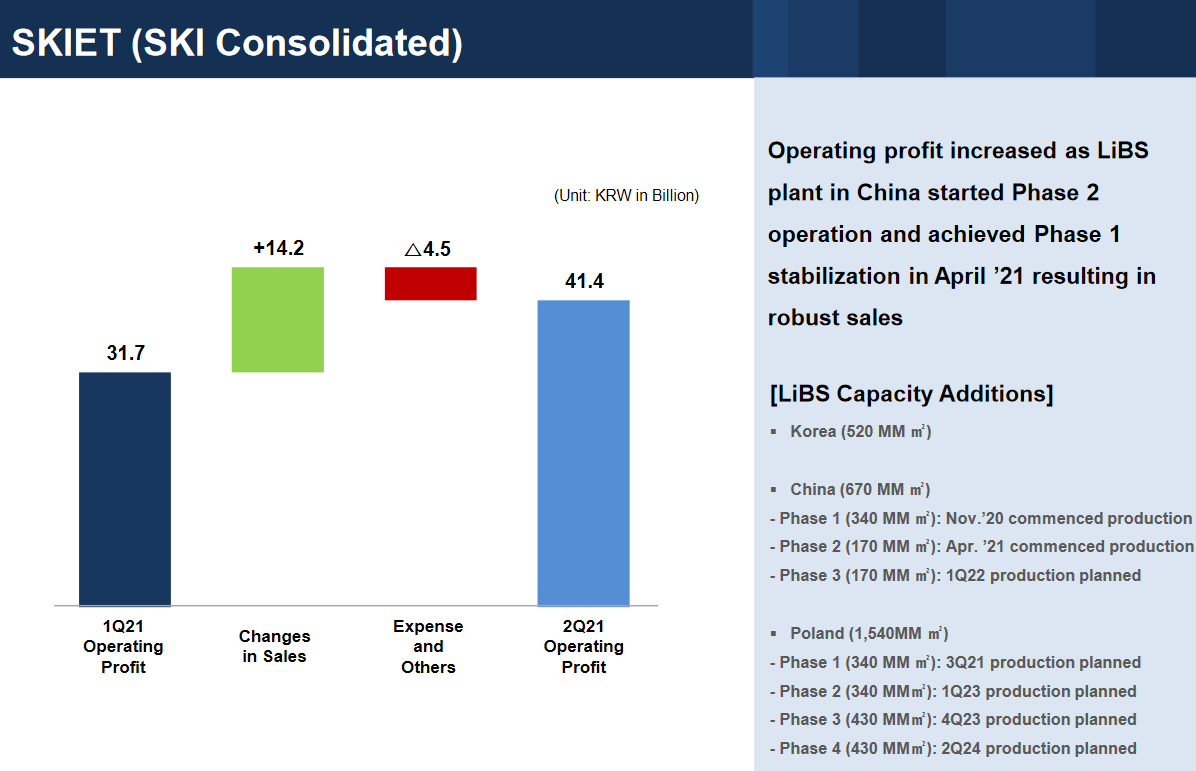 SK Innovation produces LiBS in South Korea, and since 2020 also in China. The biggest plant is currently under construction in Poland: 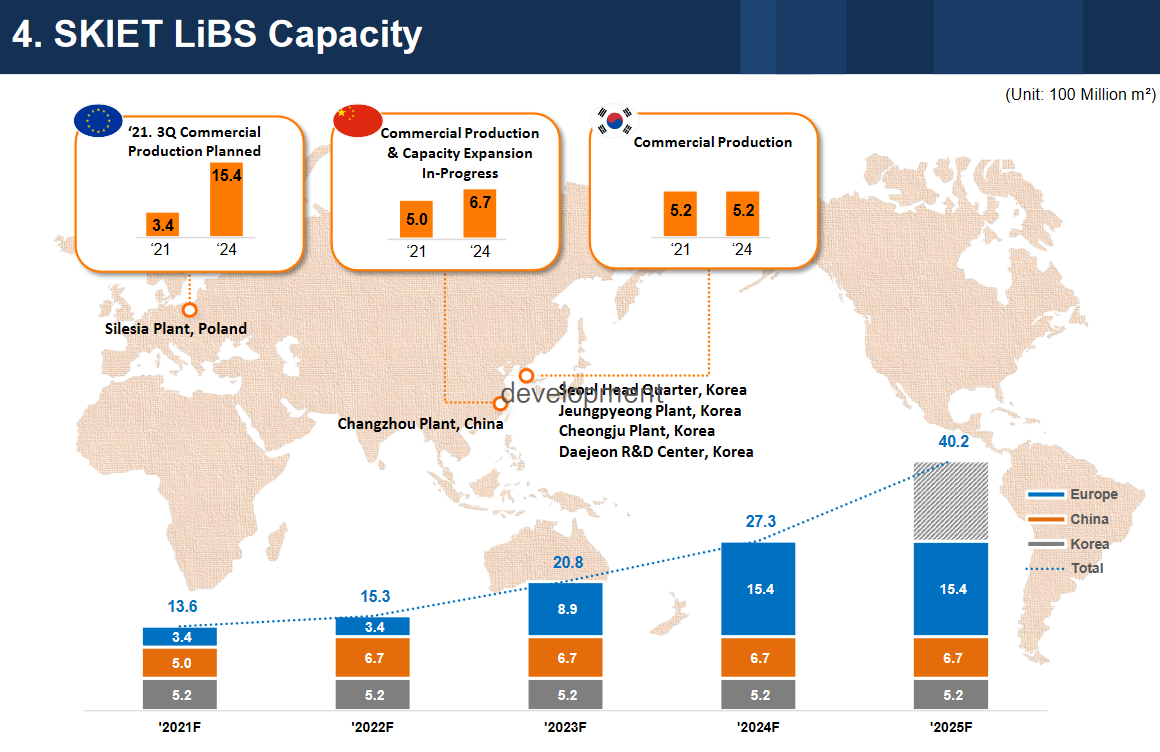