Home » Should You Buy A New Tesla Model 3 Or A Used Model S?

Should You Buy A New Tesla Model 3 Or A Used Model S? 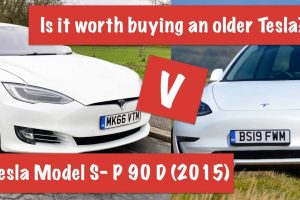 The Tesla Model 3 still isn’t cheap on the used market. A used Model S may be cheaper than a new Model 3.

First of all, Kudos to YouTube channel Red Rocket for covering this outstanding topic. This is something we’ve mentioned many times, mostly because people ask us how they can buy a used Tesla. The cheapest used Tesla is a Model S, not a Model 3. However, the Model 3 is well-priced new, and it’s much more popular.

It’s a very tough decision. Pick up Tesla’s high-end flagship model for a steal on the used market, or get the cheaper Model 3 brand-new? This is a question that people may not have to ask themselves related to many other brands. A flagship model that costs $80,000 to $100,000 new should probably cost more on the used market than an entry-level car that starts at less than half the price ($37,990).

There are a few important factors to point out here, and while they may seem obvious to some, there are plenty of people out there in the market for a used Tesla who just don’t have all the information, or simply don’t understand.

The Model S has been on the market for years, and, like most expensive luxury vehicles, it can tend to depreciate quickly, so you can pick up an older used model for less than $30,000. In the meantime, the Model 3 is just going into its fourth year, though it’s actually only been about three years since Tesla started delivering it in volume. This means there are fewer copies on the used market, and there’s high demand.

In addition, the Model 3 has incredible resale value, and most of the used copies available are not the base model. Instead, these are upper trim cars that cost much more new. A quick check of used Model 3 listing shows us just a handful of cars in a 200-mile area around Los Angeles, and they’re all selling for around $40,000 or more, which is more than buying a new base Model 3 or a used Model S.

Check out the video above for Red Rocket’s take on all of this. Then, let us know, would you choose a used Model S or a new Model 3?