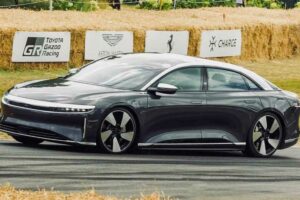 Probably the most sought after EVs for visitors see at the 2022 Goodwood Festival of Speed was the Lucid Air. Lucid brought three Airs over to the UK, one Dream Edition, one Grand Touring and one Grand Touring Performance, and the latter was actually driven up the famed hillclimb by the former Top Gear UK stig, racing driver Ben Collins.

Collins is always present at Goodwood, every year taking to the hill in all manner of powerful machines. He had several runs up the hill in the Lucid each day, and he even managed to set the quickest time for a production vehicle, as well as the 12th quickest time overall, both very impressive achievements, especially for a big, comfortable luxury sedan.

During one of the runs, he had British car YouTuber Shmee150 as a passenger and he revealed more of what he thought about the Air. But it’s not the sheer speed that impressed the former racing driver and TV personality – it was the way he was able to throw the Air into corners and how the vehicle reacted to this.

What’s interesting is that he left the traction and stability aids on for the launch, in order for the car to get the cleanest and quickest start, but then he immediately turned everything off on all the runs. And as he literally hurls the vehicle sideways into the first corner, you understand why – the nannies would never allow such behaviour, even though the chassis can clearly take it.

The Air looks remarkably fun to toss around a twisty road, and even though it’s not quite as razor-sharp as the Porsche Taycan, Lucid representatives told me while at Goodwood that they were not aiming for that. What they propose is a happy medium between the Taycan and traditional luxury cars, but if it’s sporty and engaging enough for a Stig, then it will surely be enough to please even the most skeptical ICE-loving enthusiast.