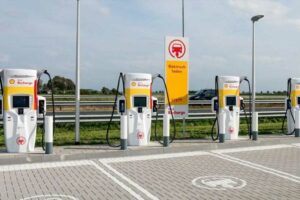 Tritium announced that ih as won Shell’s global EV charging tender and will be supplying fast chargers and services under a global framework agreement.

Shell has one of the world’s largest networks of fuel stations – over 46,000 retail sites, and since the company intends to become also a charging provider for electric vehicles, it will need thousands of chargers.

According to the press release, Tritium will supply fast chargers to Shell in Europe, South Africa, Asia, the Middle East and North America. The first chargers were delivered in 2020.

We assume that Shell will have also other suppliers along the way, but it’s still a potentially big deal for Tritium, which so far deployed more than 5,200 fast chargers in 41 countries.

“This is a great opportunity for Tritium. We have been selling EV charging infrastructure to Shell since 2020 and we’re thrilled to have been selected as a partner to Shell in this latest tender. It’s a vote of confidence in Tritium’s products and services and we look forward to supporting Shell in their endeavors to reduce emissions and enable the rapid electrification of transportation. Tritium technology has been designed to provide fast, rugged and reliable charging in any environment, and we look forward to working with Shell and its affiliates to deploy DC fast charging infrastructure all over the world.”

Besides charging infrastructure, Shell is interested also in NIO’s battery swap stations, which in the near future will be installed in China (100 sites by 2025) as well as in Europe (first, under a pilot project).