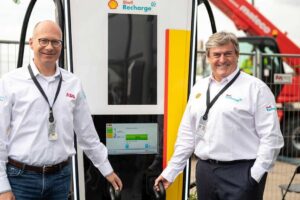 Swiss-based tech company ABB and Shell have revealed plans to roll out a new EV charger in Germany over the coming months, offering the fastest electric car charging rate in the world.

Both firms claim that with one car making use of the maximum supply, the Terra 360 unit can add as much as 62 miles of range in less than three minutes, giving premium EVs capable of charging at this rate ultra-rapid recharge times.

While there are few EVs on sale globally that can capitalise on the new unit’s charging power, ABB and Shell are futureproofing their charging network by engineering in this capability.

Istvan Kapitany, Executive Vice President of Shell Mobility, said the charger will be available “soon in other markets”. The first 200 chargers will roll out over the next 12 months in Germany and the UK will receive some in within the next year as well. ABB revealed in 2021 that the Terra 360 will launch in the USA, Latin America and Asia Pacific regions.

The collaboration between Shell and ABB will form part of the petrochemical giant’s plans to build 500,000 chargers by 2025 and 2.5 million by 2030, diversifying its business model as the new-car market moves towards EV-only sales from 2035. ABB says the energy used to power its Terra 360 chargers is also 100 per cent renewable.

Shell has also designed the charger to be more accessible for wheelchair users than previous charging units, with the plugs, screen and contactless payment pad all being positioned lower than on its previous chargers.