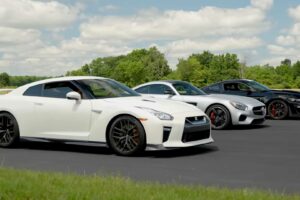 Performance cars come in various configurations today, and a new Sam CarLegion YouTube video races three of them. The Ford Mustang GT500, Nissan GT-R, and Mercedes-AMG GT S are an eclectic collection of high-horsepower machines that are far from equal on the spec sheet, and the video shows how those differences translate to the drag strip.

The GT500 hides a supercharged 5.2-liter V8 under its hood, which delivers 760 horsepower (566 kilowatts) and 625 pound-feet (847 Newton-meters) of torque to the rear wheels. A seven-speed dual-clutch transmission sits between the two.

The Mustang might have all the power in this competition, but drag racing is about more than that. The launch matters, too, and this is where the Mustang struggled. In both dig races, the Ford was slow off the starting line, leading to two third-place finishes. The GT-R’s all-wheel drive helped it secure two early victories, with the AMG GT S occupying second place.

Eliminate the standing start, and the Mustang shined. It could put more power to the ground instead of fighting for traction, and it accelerated away from the GT-R and GT S, with neither capable of catching up. The second rolling race, with the cars in manual mode, ended with a second Mustang victory. The other two competitors stood no chance, with the GT S finishing in second and the GT-R in third.