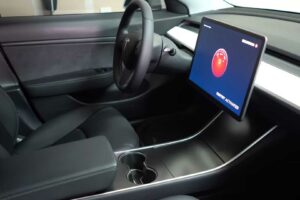 The police are now involved in the situation.

You may have seen a video circulating around social media recently. It shows a man purposely, aggressively, and repeatedly trying to damage a parked Tesla Model 3. The car’s Sentry Mode feature gets it all on camera, which will work to help the authorities as they investigate the crime.

This isn’t the first time we’ve seen someone intentionally damaging a Tesla vehicle. Thanks to Tesla’s Sentry Mode camera-based security system, as well as its built-in multi-camera dashcam (TeslaCam), owners can record these incidents. While the systems don’t seem to deter criminals, they do seem to help get them arrested.

Check out the Sentry Mode video below, which was shared by YouTube channel Wham Baam Teslacam:

Watch as the Volkswagen driver first opens his door into the Model 3, and certainly not lightly. While some people might try to argue that the door situation was an accident, it’s very clear that it’s intentional and aggressive. If you’re not convinced, what follows in the video makes the driver’s intentions very clear.

The Florida man opens his door a second time and hits the Model 3 very hard at least two times, and it appears he’s holding something sharp in his hand. The Tesla owner also posted about the incident on Facebook. She says the Model 3 has noticeable damage from the incident. She also provided an update related to filing a police report. Detectives are being assigned to the case.

Sadly, the Sentry Mode camera footage didn’t capture the man’s license plate. Tesla Model 3 owner Melissa Mel shared that they’re working with local businesses to try to get surveillance video. In the meantime, please share this around so that maybe someone can help identify the criminal.