Home » Car Reviews » Self-Driving Cars FAQ: How Far Away Is Far Away?

Self-Driving Cars FAQ: How Far Away Is Far Away? 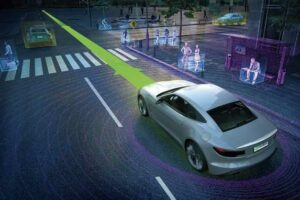 Who wouldn’t want to just press a button, have the steering wheel and pedals stowed, and let your self-driving car whisk you in cocooned comfort to your parent’s house five hours away while you sleep, work, or play with your kids? That’s a dream scenario self-driving cars promise. Proponents say there would be no more crashes, no more drunk driving, no more traffic. It’s tantalizing to think that cars will one day be able to drive us. It can also be terrifying to others who fear letting go of the wheel of control.

Self-driving cars are already here, in a sense. There are limited trials of vehicles running with no drivers along predetermined, hyper-limited routes in the U.S. and other countries, operated by their makers and technology companies. But the day when millions of self-driving cars ply the world’s roads is still a long way out. But how far? We take a look at some of the most common questions surrounding self-driving cars and when you might no longer be behind the wheel.

How Much Does a Self-Driving Car Cost?

According to former Waymo CEO John Krafcik, in an interview with German publication Manager Magazin, a Jaguar I-Pace equipped with Waymo’s sensors and computers costs no more than a moderately equipped Mercedes-Benz S-Class. So likely in the $130,000-$150,000 ballpark. Of course, these costs will come down as the technologies used to power self-driving cars (cameras, radar systems, sensors, advanced automotive computers) drop as the costs to make them become more affordable at scale and they advance enough to be relied upon in all circumstances and conditions. Using Waymo’s lidar as an example, its engineering team was able to build a version that costs 90 percent less than what used to be $75,000 a unit.

What Are These Automated Driving Levels I Keep Hearing About?

The Society of Automotive Engineers (SAE) has classified six levels of automation. Level 0, Level 1, and Level 2 systems require a human to be actively driving and monitoring the vehicle and the driving environment at all times; think lane-keep assist or active cruise-control systems as seen on current vehicles. But Level 3, Level 4, and Level 5 are where automated systems start to take control and when “self-driving” enters the picture. Level 3 is in essence a bridge level where the system can drive the car for a period of time, but the driver must still be ready to re-engage with the system at a moment’s notice. Level 4 and 5 are where the car essentially drives you, with Level 4 still having a few limited scenarios where the driver may need to take over. Level 5 means never having any control of the vehicle whatsoever.

Can I Buy a Self-Driving Car Now?

No. No vehicles available for sale in the U.S. today are self-driving. Cars equipped with Tesla Autopilot, Ford BlueCruise, and GM SuperCruise are NOT self-driving. They may appear to be self-driving, given that you can drive without your hands on the steering wheel for a predetermined length of time, but they are not reliable or capable enough to be true self-driving. Those systems are classified as Level 2 capable, where the driver can briefly cede driving responsibilities but must be alert and always ready to take over. In effect, the driver is still in charge of the operation of the vehicle, no matter what the system is capable of performing.

When Can I Buy a Self-Driving Car in the Future?

At this point, self-driving cars are more of a future technology like what you might see in Black Mirror (a near future science fiction TV drama). The tech seems highly plausible, but we are not there yet in reality. We are at a point where we may see Level 3 self-driving cars in the next five years, but they would only work in very limited conditions. Chances are, you may be able to ride in a self-driving taxi without a driver before seeing a self-driving car for sale on a dealer lot. There are still many problems to tackle before Level 4 or 5 autonomous cars can become a real thing. In the meantime, companies will sell some intermediate products to fund their self-driving development. For example, Tesla’s Full Self-Driving (FSD) system. In theory, a Tesla with FSD has the hardware to “self-drive,” but development is not there yet. What Tesla is selling now is a Level 2 driving assist system for real and self-driving as a promise.

What Are the Advantages of Self-Driving Cars?

Safety is a major benefit of self-driving cars. The prevailing wisdom is that self-driving systems will drastically reduce or even remove human error on the road, which will reduce crashes to virtually zero. Humans can get tired and distracted, something machines and algorithms will never be. Computers are also able to strictly follow rules and cooperate with one another, so along with a reduced number of crashes, self-driving cars can help smooth out traffic flow and reduce traffic jams. They can also solve the headache of looking for a parking spot by self-parking by themselves. For people who cannot drive (age, disability, or any other reason), automated vehicles can provide them with new personal mobility options.

What are Disadvantages of Self-Driving Cars?

In today’s stage, the self-drive working condition is very limited. Honda’s Traffic Jam Pilot can only self-drive under 30 mph (Audi’s under 37 mph), and Level 4 Waymo vehicles can only operate within a confined zone when weather permits. High cost will also remain a disadvantage until the technology becomes mainstream. Then there’s the question of how infallible all of the computing power and technology necessary to power self-driving cars will be. Personal computers freeze all the time. What happens when a car’s computer brain freezes?

Can You Sleep in a Self-Driving Car?

In a true Level 4 or 5 automated vehicle, yes, you could sleep, but at that point, you’re basically a passenger, much like riding in a taxi. But in a Level 3 car you’ll need to remain awake because whenever self-driving conditions are not met, the system needs a human driver to take control. And NO, DO NOT sleep in a Tesla on Autopilot. It is not a self-driving car, even if you bought the Full Self-Driving option.

What Technologies Are Essential for Self-Driving Cars?

Driving is a complicated task, so there are many technologies involved. To name a few: ultra-high-resolution cameras with high-dynamic-range sensors to see in various light conditions, ultrasonic sensors to detect objects around the car, light-emitting radar (lidar) to detect faraway objects, ultra-fast computer chips to process the large influx of data pouring in by the millisecond (not to mention storage of said data), and sophisticated software to do the driving. You also need high-speed internet connections to move data to and from the car, to and from other cars, and to and from any infrastructure. One major tech development that will help speed up self-driving car development is machine learning. It contributes to a boost in developing greater image recognition and driving algorithms.

What Is Machine Learning for Cars?

In very basic terms, machine learning is trial and error done many, many, many, many (did we say many?) times by incredibly fast and sophisticated computers until it comes up with a close enough answer. Driving is a very complicated task to code line by line (it’s pretty much impossible), but the computers we have today can do a lot of calculations very quickly, so we let them figure it out for us. We give them a lot of data, and they essentially “learn” to connect the dots and figure out the pattern. Let’s say we need to train a neural net (basically, a replication of a brain’s neurons in computer form) to recognize a bicycle. We then show the computer an influx of images (millions, the more the better) with various bicycles in various conditions. After countless iterations of trial and error, the neural net can then recognize bicycles from any image with probably 98 percent confidence. Then we continue to show it many more images to reach as close to 100 percent as possible. With this bicycle-recognition neural net, then we can apply it to make a self-driving software able to avoid running over bicycles. Here’s the scary part about machine learning. Humans don’t really know how computers connect the dots. They do so many iterations of calculations, we can’t trace them all. We might at certain degrees, but not entirely. Rise of the machines, here we come.