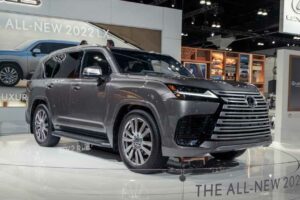 The updated 2022 Lexus LX600, officially introduced just over a month ago, strutted its stuff (mostly that gigantic grille) for us in person for the first time at the Los Angeles Auto Show. This is the second time the full-size luxury SUV has been shown off publicly, the first time being in the crowded Lexus booth at the recent SEMA show in Las Vegas.

The new LX is the Lexus version of the 300-Series Toyota Land Cruiser, which isn’t sold in the United States. Therefore, those wishing for the iconic Toyota off-road nameplate will have to settle (or shall we saw, upgrade) to the more lux, more techy Lexus-badged version. Pricing hasn’t been announced for the LX600, which will go on sale sometime in the first quarter of 2022, but expect to shell out $90,000.

Lexus gives the LX a dual-screen setup in the center stack. The 12.3-inch upper screen displays things like navigation, entertainment, and exterior camera views, while the 7.0-inch lower screen handles climate controls and vehicle info like driving modes, heights, and so on.

Under the hood, the 2022 Lexus LX600 drops the 5.7-liter V-8 from the outgoing LX570 in favor of a twin-turbo 3.4-liter V-6 making 409 hp and 479 lb-ft of torque, backed by a 10-speed automatic transmission. It’s unlikely the LX will ever get a diesel powerplant like the Land Cruiser, but it is likely the hybrid version of the V-6 (debuted on the new Toyota Tundra) could make an appearance.

There’s more to come on the LX600, but for now, enjoy these quick detail snaps of the exterior and interior from L.A.