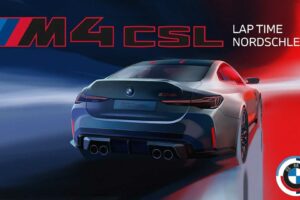 Shortly after unveiling the M4 GTS back in 2015, BMW announced the hardcore coupe with its water injection system had lapped the Nürburgring in 7 minutes and 27.88 seconds. Fast forward to 2022, its spiritual successor has managed to shave off more than seven seconds by completing a lap of the Nordschleife in 7 minutes and 20.20 seconds. Consequently, the M4 CSL is now the fastest street-legal BMW on the Green Hell.

Behind the wheel of Bavaria’s third-ever Coupe Sport Lightweight model was development engineer Jörg Weidinger. Working for BMW for over 20 years and at M GmbH since 2013, the skilled driver was also responsible for the M4 GTS’ lap time. The reason why the car is still camouflaged is that the record-breaking run was done while the M4 CSL was still being tested at the ‘Ring.

These impressive numbers were made possible after bumping the inline-six engine’s output by 40 horsepower while shaving off 240 pounds (108.8 kilograms) compared to the Competition model. The automatic-only CSL also received aerodynamic upgrades, allowing it to tackle corners at higher speeds than the lesser flavors of the M4. For superior stopping power, ceramic brakes come as standard equipment, which we can say the same about the adaptive suspension electronically controlled dampers.

Although the upcoming XM will be a dedicated M car and the first since the original mid-engined M1, it’s highly unlikely its lap time will ever get close to the M4 CSL’s lap time. It’s impossible to engineer a heavy SUV to be as nimble as a much smaller vehicle that only has two seats. That said, BMW is believed to be planning a 3.0 CSL revival based on the M4 CSL, but with 600 horsepower and even a manual gearbox.