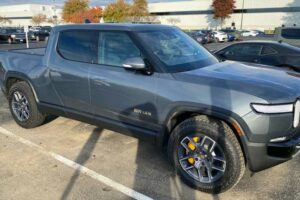 While Rivian is preparing for its IPO, a bunch of Rivian R1T electric pickup trucks were recently seen at Rivian’s plant in Normal, Illinois.

We counted about 10, some of them charging, others just parked. Many have yellow plates, but some might actually be customers’ vehicles. We must remember that “Nearly all” of the initial deliveries were to Rivian employees.

Devodare_Chicago, who shared the video, wrote:

Just sitting in front of the Normal, Illinois headquarters and factory. Rivian trucks are on roads in Central Illinois. They are beautiful.”

We guess that until the IPO, employees-customers will not be willing to talk much about the vehicles. The company obviously does not want to risk any issues. This is why we are still waiting for independent in-depth reviews and tests.

Anyway, history is in the making – we are watching a parking lot full of electric pickups. Something that might become a common sight in the next 10-20 years in the U.S., where the pickups are especially popular.

Many other manufacturers, including Chevrolet, Ford, RAM, Tesla and even Toyota announced electric pickups. The next one will be the more mainstream Ford F-150 Lightning (aside from the limited, halo GMC Hummer EV).

And here is one more view of the Rivian R1T – this time a short clip, in some traffic. The smooth, silent, effortless and brisk acceleration will surely attract a lot of pickup drivers to Rivian: