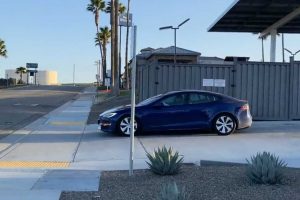 It’s one of the first videos of the new Model S seen driving.

Soon, the significantly refreshed new Tesla Model S is going to hit the road. Actually, some of the cars already were already seen driving.

Here we can see a short video of a blue Model S that is leaving the Supercharging station and takes off (turning back included).

As we can see in the reddit topic, the new Model S is equipped with a new, but conventional round steering wheel (no yoke version).

Everything looks different than in the outgoing Model S. Hopefully, soon we will see many video reviews of all the changes.

The new Model S was seen leaving the Tesla factory in Fremont, California on car carriers, so volume customer deliveries are probably just around the corner.

After the latest update to the online design studio, the expected delivery time for new orders was at 4-11 weeks (Plaid+ in Late 2021). The Model X will follow after the S – in May-June.

Another version of the same video: