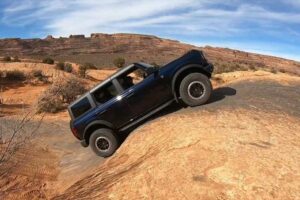 For an SUV to prove its worth, it should be able to take on a trail. Modern SUVs pack advanced features and trick differentials that manufacturers love talking about in press junkets. But if it can’t perform, it won’t cut the mustard for true off-roaders.

The Ford Bronco, Jeep Wrangler, and Range Rover Sport are some of the most capable 4x4s available today. To see what those SUVs do, a group of off-roaders took those models out to Moab. To be more specific, the drivers took the new Bronco, the first-generation Range Rover Sport, and the electrified Wrangler 4xe. So how did each SUV perform?

Starting with the Range Rover Sport, it fared well enough despite being the oldest of the trio. It also appears to be stock aside from the all-terrain tires. The Range Rover Sport climbed up the rocks with only minor hesitation, letting its electronics help it out of a tough spot. The British SUV also had enough power to tackle the challenges. It was only let down by its ground clearance and long overhangs.

Moving to the Wrangler 4xe, its run up the mountain should quell any doubts about its off-road capabilities. If anything, the electric motor’s torque greatly benefitted the Jeep in the steep climbing sections of the trail. Unlike the Range Rover Sport, the Wrangler’s short overhangs meant there was little fear of damage during steep ascents. Curiously, it also kept scraping its midsection. It even got high-centered at one of the obstacles, suggesting that it has the lowest breakover angle of the trio.

As for the Bronco, it was the one that made it through the day with the least hitches. Based on the video, it didn’t scrape as much as the Range Rover Sport or the Jeep, and it performed the more challenging sections as well as it could. Even though it didn’t climb the rocks as effortlessly as the electrified Jeep, the Bronco still overcame the same obstacles the SUVs faced.

The video isn’t a direct comparison of the three SUVs. Instead, it shows how well these vehicles perform in the environment they were meant to excel. Sure there were some scrapes and scratches along the way, but it’s great to see these SUVs put to the test.