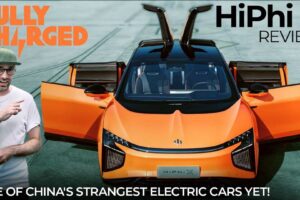 The HiPhi X is a halo model from Human Horizons, a Chinese EV startup founded in 2017, which appears to at least partially resemble the Tesla Model X.

We know that the EV startups are pushing the boundaries, but in this case it might be a few steps too far.

While the specs are not bad, the HiPhi X is loaded with gadgets and tech that appears to be overcomplicated to a degree at which the Model X looks quite conventional.

For example, there are no door handles and opening of the doors is literally controlled via buttons on the key fob. Not all of the functions appear to be easy to use right away.

The thing that catches our attention is the rear suicide doors, accompanied by Gullwing-style roof openings. In the front there is a fully-programmable LED matrix. Another thing noted by Fully Charged is an abundance of displays, including a large display for the passenger in the front (instead of the glove box).

On the positive side, the rear-wheel steering minimizes the turning circle. The car is comfortable and quiet.

It will be interesting to see how the HiPhi X will cope on the Chinese market. Feel free to leave us a comment on what do you think about the HiPhi X.