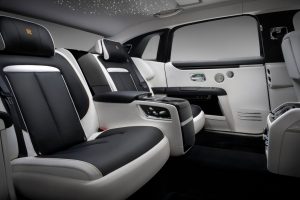 Rolls-Royce has announced the new Ghost Extended, which the company says offers enhanced rear seating space with no compromise to the new Ghost’s driving dynamics. This is the LWB version of the second-generation Ghost that was revealed earlier this month.

Apparently, the Ghost Extended is what the new generation of Rolls-Royce clients – described as global, highly dynamic group of entrepreneurs – want: a chauffeur-driven business tool for the week that can transform into a comfortable and dynamic self-driven saloon at the weekend. “Ghost Extended answers this customer demand by creating a product that augments both their business and lifestyle requirements,” says R-R CEO Torsten Muller-Otvos.

How much more room? The Ghost Extended offers 170 mm more space than the regular second-generation Ghost – that’s more rear legroom than any four-seat sedan from Goodwood with the exception of the Phantom Extended. Overall length is 5,716 mm and 3,465 mm of that is between the wheels. Adding length to a car isn’t just plug-and-play, design wise. To preserve the new Ghost’s minimalist design, the designers worked to cloak the extra length by only extending the rear door and body around the rear door apertures, preserving the lines of the limo.

The extra room allows for a reclining Serenity Seat to be selected. Rolls-Royce calls this a new dimension of rear seat comfort akin to a business jet cabin environment. The champagne fridge between the rear seats was developed with info from a master sommelier. Engineers learned that the optimum serving temperatures of non-vintage champagne is around six degrees centigrade and vintage champagnes around 11 degrees centigrade – these are the two cooling modes available.

The new Ghost is equipped with a Micro-Environment Purification System (MEPS), which enhances existing air filtration systems through software and hardware. Impurity detection sensors detect ambient air quality, automatically activating fresh air intakes into recirculation mode. If unacceptable levels of airborne contaminants are detected, the air is passed through a nanofleece filter capable of removing nearly all ultra-fine particles in the cabin in less than two minutes. The LWB Ghost is built on Rolls-Royce’s proprietary all-aluminium spaceframe. The marque’s hallmark “Magic Carpet Ride” is delivered by the new Planar Suspension System, which is supposed to be the result of more than 10 years of testing and refinement. Featuring continuously variable, electronically controlled shock absorbers, self-levelling high-volume air strut assemblies and a world-first upper wishbone damper; this is a world’s first.

This generation drops the BMW 7 Series’ 6.6 litre V12 in favour of the Phantom’s 6.75 litre unit. For the Ghost, the twin-turbocharged motor has been tuned to deliver 571 PS at 5,000 rpm and 850 Nm of torque at 1,600 rpm. Paired to a ZF eight-speed automatic gearbox, the 2,530 kg Ghost Extended (100 kg of acoustic damping materials have been incorporated into the chassis, bodywork and tyres) does 0-100 km/h in a smooth 4.8 seconds. The quoted figures are similar to the non-extended car.

These are just some highlights – there are plenty more fascination points on the new Ghost, and you can be fully wowed here.