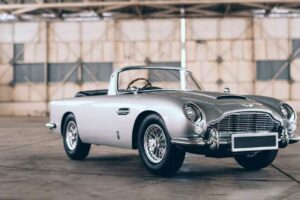 Since debuting on the big screen in 1964’s Goldfinger, the third James Bond film, the Aston Martin DB5 has become one of the most famous movies cars of all time. To commemorate the 25th film in the 007 franchise, Aston Martin, in collaboration with The Little Car Company and EON Productions, is releasing a two-thirds scale version of the DB5.

Last year, as many of you Bond fans may recall, Aston Martin unveiled the $46,000 DB5 Junior model built by The Little Car Company. The DB5 Junior No Time To Die Edition, inspired by the latest Bond film, features clever spy gadgets, offers more power, and an extended driving range. As such, this special edition DB5 will cost more than double the price of the previous model.

Designed as a roadster, the pint-sized No Time To Die Edition is a mini replica honoring the shared history between Aston Martin and the 007 films. The battery-electric DB5 has an 80-mile driving range and a top speed of 45 mph. Coilover springs with Bilstein dampers support the additional power, while Brembo brakes handle slowing the thing down. Components such as the fuel gauge, which measures the battery level charge, were reimagined for the modern age.

Suitable for secret agents on spy missions, the No Time To Die Edition comes equipped with a quick-release steering wheel, allowing occupants to exit and enter the cabin in no time. It features Silver Birch paintwork, Smiths instruments, and each build has an individually numbered chassis. And just like the kids, the adults can also enjoy some seat time in the spy-inspired DB5 because they will be accommodated, despite the size.

As for developing the complex gadgets in miniature form, The Little Car Company consulted Oscar-winning special effects supervisor Chris Corbould, who has worked on 15 James Bond films. Simulating the film car, the special edition DB5 Junior can release a smoke screen during an escape. The safe smoke, stored in a supply tank, exits through the rear tailpipes and provides one hour of fun before requiring a reload. Even more impressive, the headlights lower and transform into simulated Gatling guns that produce imitation barrel blasts and flashes. Other neat gear includes skid mode to get out of tight spots and a unique digital number plate. You can operate these one-of-a-kind gadgets using individual controls in a switch panel concealed in the passenger door.

The special edition DB5 Junior is not road legal; however, some perks make up for that. In addition to hidden easter eggs within the car, every buyer will receive automatic membership to the Aston Martin Owners Club. Also included is a complimentary The Little Car Club membership, which allows owners, including children, to participate in exclusive driving events. Limited to 125 examples and considered a future collector’s item, the Aston Martin DB5 Junior No Time To Die Edition costs £90,000, or approximately $123,000 in U.S. currency.