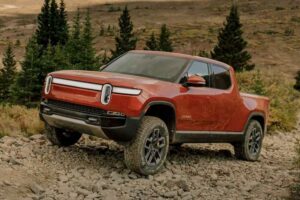 The former Ford manufacturing engineer and current head of Munro & Associates, which tears down vehicles and advises carmakers on how to improve them, told Automotive News the R1T “should be selling for $100,000 — it’s way underpriced for what it is and what it does.”

That’s a similar assessment to that of Peter Rawlinson, CEO of EV maker Lucid, who told Reuters in March that the R1T probably needs to be priced at $95,000 to be profitable.

The electric pickup starts at $67,500 in dual-motor guise, but the four-motor model Sandy Munro is currently tearing down at his company’s headquarters in Auburn Hills, Michigan, starts at approximately $79,000. It’s not all bad news for Rivian, though.

Known for its blunt assessments of electric vehicles from Tesla and other companies, Munro also says the R1T could use some engineering and production changes to reduce its manufacturing cost; he talks about “buckets of cost reduction opportunity.“

While that’s encouraging for a young company, it’s not unusual for a brand-new vehicle from a first-time manufacturer to have room for improvement. Raising the vehicle’s price could still be a challenge, though. On March 1, Rivian announced abrupt price hikes that angered its customer base, with many early supporters threatening to cancel their preorders.

Following the backlash, Rivian rolled back the price hikes for existing reservation holders and said it would honor the original prices.

The R1T features a body-on-frame design, just like the Ford F-150 Lightning, but its bed and cabin are all one piece, unlike the F-150. The Lightning starts as low as $40,000 in fleet-oriented Pro grade, while the R1T is priced from $67,500 in dual-motor guise with the new Standard battery pack expected to offer over 260 miles of range.

Munro director Ben Lindamood points out that the R1T is designed and built quite differently from traditional full-size pickups. The build quality is not as good as vehicles from more established brands, though.

Sandy Munro especially likes some of the clever touches on the R1T, such as the tailgate, power tonneau cover and large under-bed storage compartment just behind the cabin.