Sandy Munro Is Proud Owner Of A Rivian R1T: He Sold His Wrangler 4xe 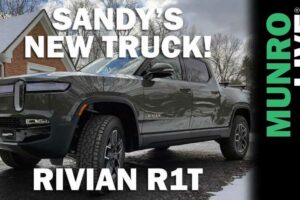 Well-known automotive teardown expert Sandy Munro just published a new video highlighting his Rivian R1T. To be clear, this is not an EV that’s borrowed or belongs to the company. Rather, it’s actually Sandy’s personal electric truck. Well … to be even more clear, it’s Sandy and Sue’s truck.

Sandy brought his wife Sue onto this episode since he’s talking about the family’s new personal ride. Sue makes it clear right up front that the Rivian R1T is not only Sandy’s truck, but also hers. Who do you think will spend more time behind the wheel of this highly capable and luxurious machine?

Sandy explains that Munro Live had plans to get ahold of a Rivian R1T to perform one of its sought-after teardowns. However, he’s been enamored with the electric truck for some time now, and he’s honest to say he just couldn’t tear it apart. Instead, he decided to keep it, which meant saying goodbye to his recently acquired Jeep Wrangler 4xe plug-in hybrid electric vehicle (PHEV).

Munro is a big Jeep fan, as is Sue, but they really wanted a fully electric vehicle. Being that the 4xe is a hybrid, and Jeep isn’t yet offering all-electric versions, the Rivian R1T took precedence.

The R1T’s fully electric powertrain is certainly not the only reason the Munros fell in love with it. Sandy is thoroughly impressed at how successful Rivian has been with the truck despite it still being a low-volume vehicle in the very early stages. Not to mention the fact that it’s from a startup automaker that’s clearly struggling financially. If Rivian wasn’t having early growing pains, it could be argued that it wasn’t putting enough effort into making the R1T the early success it has already become.

Sue notes that the R1T has plenty to offer, especially considering its price. We’re talking about an expensive and luxurious long-range pickup truck that’s arguably one of the most off-road-capable new vehicles on the market today. The R1T is unique in that while it feels like a comfortable luxury cruiser in just about every way, it also delivers the practicality and capability of a hardcore off-road truck.

As the story goes, the Munros provide an initial tour of the R1T. Sue actually gets quite a bit of camera time, and it’s refreshing to hear her opinions since we already have a pretty good idea about how Sandy feels about the truck. Sue has told Sandy that the Tesla Model 3 is the best car she’s ever driven. He agrees to a degree, though he prefers the Model S even more. However, it seems the R1T may win them both over, knocking the Tesla sedans down their list of favorites.