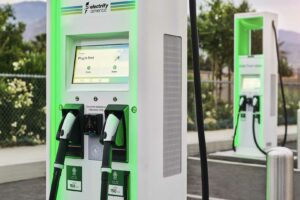 An investor with a billion dollars would be welcome.

According to Reuters‘ unofficial sources, Volkswagen looks for a co-investor for its wholly-owned Electrify America subsidiary, established a few years ago, mostly to build fast charging infrastructure in the U.S. as a punishment after the emissions cheating scandal.

Electrify America is currently one of the largest public fast charging network in the country with some 635 stations and 2,850 individual chargers (many with an output of up to 350 kW). By the end of this year, the number of stations is expected to increase to 800 (3,500 individual chargers) in 45 states.

However, as the EV market expands, the network needs to expand as well, which means that Electrify America needs a cash injection. We guess that Volkswagen would like to find one or multiple partners (or might even sell the network according to Reuters), because the capital needs are counted in billions.

Reuters reports that Volkswagen is working with Citi to find a co-investor that would agree to invest $1 billion in Electrify America. The investment plan for 2017-2026 is $2 billion.

“Volkswagen is to sell a stake in its electric vehicle charging unit Electrify America, two people familiar with the matter said, as the carmaker looks for outside funds to build infrastructure for battery-powered cars'”

Only time will tell how it will end. In Europe, the IONITY fast-charging network was established by a group of several car manufacturers, but the rollout is lagging heavily behind schedule.

In the U.S., some automakers might be interested in acquiring a minority stake in the company as well. Other options would be competitors, general infrastructure investors or fuel/energy companies (utilities).

Attracting investors is highly dependent on the financial outlook and viability of the network. The more EVs there will be on the roads, the higher the revenues and potential profits will be (in the initial period, charging networks are not profitable).