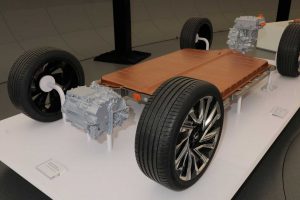 The decision will be made in the first half of this year.

General Motors is looking for a second lithium-ion cell battery plant with LG Chem’s LG Energy Solution in the U.S., according to unofficial media reports.

The two already established a 50/50 joint venture Ultium Cells, which is building a 30 GWh lithium-ion cell factory in Lordstown, Ohio.

According to The Wall Street Journal‘s sources, the second plant could be built in Tennessee but the final location is not yet known. The decision is expected in the first half of this year.

Interestingly, LG Energy Solution said that it has plans to build battery plants in the U.S. for multiple OEMs:

Considering that Ford would like to see more battery factories in the U.S., it’s probably one of the first candidates.

At this point, we don’t know much and even Tesla might be interested in LG Chem batteries in the U.S., especially taking into consideration the new 4680 cells, for which LG Chem developed a pilot production line.