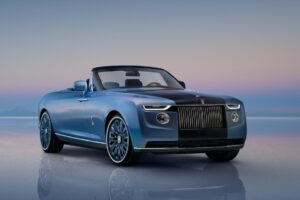 As the coronavirus pandemic shut everything down and everyone in, we believe Rolls-Royce designers were sheltered in their mood rooms, bored out of their tweed suits, with nothing to do but draw excessively.

“Excuse me, designer Gordon. I think I have an idea our billionaire clientele would die for,” designer Alfred motioned to the thin, loafer-clad man at the desk to his right. “I’m listening,” designer Gordon said, not looking up from his sketch of an electric Rolls-Royce pickup truck.

“What if, good sir, we made a picnic basket … out of a Dawn … and then we put an umbrella on the back?” Designer Gordon was so struck by this bit of genius he fell backward out of his chair and into a daze. Once he got up, several minutes later, the two designers got to work.

Eight months later Rolls-Royce gifted the world this wild-looking land yacht: the Boat Tail. The car itself isn’t actually the result of a conversation between two designers, but a commission from one of Rolls-Royce’s customers. The Boat Tail is likely based on the Dawn (though there’s no official word on that from Rolls), the drop-top version of the now-extinct Wraith.  Rolls-Royce states that just three will be built.

Depending on how wonderful (or vulgar) you think the Boat Tail is, this is either a blessing or a shame. Regardless, the Goodwood-based company notes the new program that gave us the Boat Tail, Rolls-Royce Coachbuild, is here to stay for good. Coachbuilding is a practice that has been integral to the history and heritage of Rolls-Royce since its beginning, and we’re sure there are dozens of eager billionaires who are salivating at the chance to fork over however much money for a unique one-off (or three-off in this case) British beauty.

Even if its looks are subjective, the Boat Tail is an objectively special machine. The rear deck opens to reveal a refrigerator and a set of cocktail tables that Rolls-Royce notes “elegantly rotate to mimic the offering of an attendant.” The fridge—no, sorry “cool box”—has been tested in temperatures as low as -20 degrees Fahrenheit and as high as 175 degrees.

And yes, there really is an umbrella that pops up and out of the rear decklid, though there’s no word on if the conventional Rolls-Royce umbrella is still slotted in the door of the Boat Tail. It’s one of the most whimsical machines we’ve seen in a long time. It’s always nice to see what happens when uninhibited imagination and unlimited money collide.