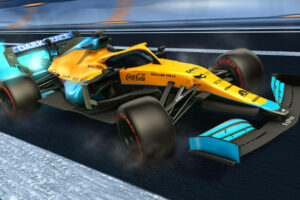 Following March’s announcement, and the NASCAR Fan Pack earlier in the month, we now have all the information on Rocket League‘s Formula 1 Fan Pack.

Like the NASCAR pack, the F1 pack brings a bunch of content to allow the sport’s fans to kick about a virtual football using the 2021 season machinery. It consists of a base model car, employing the Dominus hitbox just like the NASCAR pack, and full livery decals to give the car the look of your favorite team.

There’s the full suite of team entries in the 2021 Formula One season, so whichever team you cheer on there’s a car for you. Unlike the NASCAR pack there’s not individual liveries for specific drivers — so you can drive as Mercedes, but not Lewis Hamilton or Valtteri Bottas — but then the cars don’t actually include drivers.

In addition the pack includes F1-style Pirelli wheels, though these are only for use on the F1 cars.

The full pack contents are as follows:

If you want to pick up the Formula 1 Fan Pack, it’ll set you back 2,000 Rocket League Credits, but you’ll need to be quick about it. The pack is time-limited, and only available from May 20 to May 26 — covering the weekend of the famous Monaco Grand Prix.

Again, just as with the NASCAR pack, it will become available again periodically, to “coincide with major Formula 1 events”. Although there’s no details on when exactly this will be, it will likely be alongside the grands prix at historic circuits like Silverstone (July 18) or Monza (September 21).