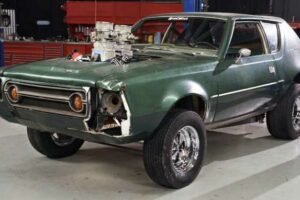 It’s finally happening! David Freiburger is fulfilling his street freak dreams, and the Hemi Gremi is actually getting built! You might remember the running and driving 1975 AMC Gremlin Roadkill bought for only $700 to pit head-to-head against a Toyota Prius in episode 17, but you’re probably thinking about the Prius being run over by the tank instead.

However, the time has come, no more false starts or excuses: Freiburger has a genuine 426 Hemi, a Sam Strube Model A drag racing chassis, and two of Mike Finnegan’s buddies, Andrew and Matthew Calkins, on deck to help out. Welcome to the Roadkill fleet, Hemi Gremi!

Related: How many project cars does Roadkill have? With 120+ episodes, only available on the MotorTrend App, there are too many cars to count! But you can count on only $3 per month (billed at $35.99) for one year of the MotorTrend App, if you subscribe by June 30, 2021!

Why has it taken so long for the Hemi Gremi to come to life? Have you ever tried to stuff a 426 Mopar big-block into the engine compartment of an AMC Gremlin? Packaging issues aside, Freiburger doesn’t care about straight-line speed for once. The Hemi Gremi is all about style and fun, and that made bench-racing the build complicated. The original plan was to fabricate a straight-axle front suspension like a 1960s Gasser, but the more the Roadkill crew and friends looked into it, the more they realized they were just making things complicated. Trying to get the solid front axle to accommodate the Hemi engine and integrated into the Gremlin’s unibody was going to be a fabrication mess.

Enter Sam Strube and his Ford Model A drag racing chassis. The name and chassis should sound familiar: It’s the same builder who made the rails under Freiburger’s F-Rod Model A drag car. The Model A chassis takes care of all the complicated front suspension geometry problems the guys were going to have to solve themselves. Freiburger opted for a straight axle, not a drop axle as is most commonly seen on Model A hot rods, which only adds to the Hemi Gremi’s cartoonish stance.

The Model A chassis had to be shortened to accommodate the AMC’s shorter wheelbase, making the ladder bar and hairpin pivots right next to each other, adding so much to the comical street freak stance. The big challenge comes in modifying the unibody of the Gremlin to fit a ladder chassis.

At first, the plan was to mate body and chassis with Jeep CJ-7-style body mounts, but that idea was quickly abandoned after a test fit. The only way to build the Hemi Gremi right is to channel it—cutting slots in the floor and frame rails of the Gremlin to fit over the Strube chassis like the two pieces were always designed that way.

It only makes sense that the team use a traditional hot rodder’s technique to drop the Gremlin shell onto the Model A rails. With most of the floor and all of the transmission tunnel cut out and all but the exterior sheetmetal forward of the firewall ditched, the Hemi Gremi is basically a high-riding Ford Model A with a 426ci Mopar V-8 under the hood. Well, Freiburger says he wants a hood, but the cartoon blueprint of the street freak Gremlin shows twin carbs atop a tunnel ram obscuring most of the forward visibility, as it should.

The Gen-II 426 Hemi going in the Gremi needs all the induction help it can get. Freiburger says he got it way back in the mid-’90s, when Mopar first introduced its performance crate engines, and it’s been waiting for a home ever since. The small cam, heads, and low 9:1 compression are “only making about 530 hp,” according to Freiburger, but that should still be more than enough to turn those Pro-Trac N50-15 rear tires into vapor. Freiburger says he wants reliability, but this is Roadkill, meaning it’s only a matter of time before the 426 sees some form of enhanced induction.

And that’s all this street freak is supposed to be: a tire-vaporizing laugh factory. Street freaks were never meant to be race cars. They were always stylish posers built as tributes to a time before suspension and tire technology caught up with how much horsepower racers were putting down. David Freiburger has fast cars; the Model A mentioned earlier is built to run 9s. He also has cars that can do burnouts, too. That’s, like, the whole point of Roadkill, isn’t it? Any excuse possible to melt tires. What Freiburger doesn’t have is a car that can be road tripped comfortably, hooned with impunity, and looks hilarious while doing it. Except now he does. And you get to watch all the fun.