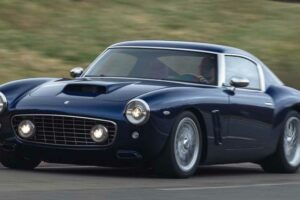 You’re right to be skeptical. The car you see here—the RML 250 Short Wheelbase—is a strange concoction of Ferrari 550 Maranello and the stunning 1959 250 GT Berlinetta Short Wheelbase—or 250 SWB, as it’s commonly known. It’s built by RML, a company based in Northamptonshire, England, and costs $1.6 million. RML will create just 30 examples, and there’s a good chance you think this is a pastiche designed to separate millions of dollars from the rich and stupid. Or at least those with the stupid desire to always have something different from their billionaire buddies, no matter the cost or concept. The Ferrari-based RML 250 SWB is certainly different, but why does it exist at all?

RML CEO Michael Mallock grins at the question. “We started as a race team and have transitioned into an engineering company working for OEMs—very little of which we can talk about,” he says. “Without the high-profile motorsport presence we once had, and being as much of our work is invisible to the public and manufacturers we aren’t working with, we needed a project that showed the full scope of our capabilities.”

It’s a good answer and rings true, but the next part is even more telling.

“There’s more than a bit of pride, too,” Mallock adds. “The first Mallock was built in 1958, and we’re one of the oldest independent manufacturers in the U.K. I’m proud of that heritage, and I’m really proud of this car. There will be more limited series projects to follow.”

RML’s history and reputation give the 250 SWB instant credibility. The family’s story with cars began with Arthur Mallock, Michael’s grandfather, a prolific hill-climb driver and racer in the ’40s and ’50s who, in 1958, introduced the Mallock U2 special. A lightweight spaceframe chassis designed to be stiff and strong, it was most importantly affordable for any enthusiast. Customers could buy a U2 chassis for 48 pounds and 10 shillings (about $120 at the time), fit it with their own mechanicals, typically from an Austin 7, and go racing. It’s developed over the years, and dozens of U2s still compete in the U.K. in various series with great success. Think of it as a kind of single-seater Lotus Seven.

The motorsports story continued with Ray Mallock, Michael’s father, a talented driver and engineer. He formed Ray Mallock Limited (RML) in 1984, and things got more serious. From Group C cars and Le Mans success with the Aston Martin Nimrod project to various factory programs in the British Touring Car and World Touring Car series, RML accrued vast experience and an enviable reputation. It also developed Nissan’s Deltawing Le Mans project and recently designed, engineered, and produced the NIO EP9 EV hypercar, which ran the Nürburgring in just 6 minutes, 45.9 seconds. At the other end of the scale, RML is the builder of the Bizzarrini 5300 GT Revival Corsa continuation cars. The project will see the creation of 24 new versions of the wonderful 1960s racer designed by Giotto Bizzarrini, father of the Ferrari 250 GTO.

In other words, RML has competed at the highest level and now works with OEMs on engineering projects, battery technology, and secret stuff it can’t talk about. Its 250 Short Wheelbase is a way to emerge from anonymity, showcase its engineering prowess and limited-production expertise, and have an awful lot of fun.

The 250 also chimes perfectly with the growing movement toward more analog, intimate driving experiences. “At the start of this project, the car was all set to be a hypercar,” Mallock says. “You know the score: carbon tub, loads of downforce, over 1,000 hp—and totally unusable and pointless on the road. Then I realized I just didn’t find that concept interesting. So, we thought of something a little different.”

In glorious Tour de France blue and with immaculate panel gaps, you’d never guess this RML 250 SWB is a prototype. But RML’s background means the company isn’t happy to throw something together, make it sparkle, and then hand customers a lovely jewel that falls apart the moment it’s driven hard. Instead, the car will undergo the same durability tests as an OEM limited-series car, including hot and cold testing and thousands of hard miles at high speeds over vicious Belgian pave cobblestones and on various test tracks to verify the dynamics and create durability. It’s about 85 percent there in terms of chassis setup but still wears rapid-prototyping interior panels, a Motec dash for data logging, and an exhaust that’s not quite production specific.

Much of our skepticism melts away quickly. There’s theater in just settling down into the cockpit. You hold the delicate, thin-rimmed leather steering wheel that’s evocative of an old Nardi wooden item but with a much smaller diameter. It’s simply gorgeous to run your hands around. The centrally mounted, metal-framed dials for oil and water temperature and oil pressure are inspired by the past but feel new and perfectly realized. The interior was subject to a “no plastic” mantra, and the level of geeky obsession is gloriously tangible. Just turning the headlight switches and heater controls is an event. Of course, standing proudly on the transmission tunnel is an open-gated six-speed manual shifter.

All these details fit perfectly with the unique driving environment. You sit close to the upright windscreen, just as you would in a classic 250 or any of the amazing ’50s and ’60s racers from Jaguar, Aston Martin, or Ferrari. Even though the SWB retains the 550 Maranello’s basic floor plan and suspension arrangement, there’s a real sense of intimacy. The 5.5-liter V-12 engine is stripped to the liners, rebuilt, and blueprinted. However, RML resisted the urge to fit racing-style engine management software to go looking for more horses. This isn’t a car too concerned with straight-line speed; even so, with 479 hp at 7,000 rpm (RML has found the donor cars to have around 420 hp on average before being refreshed) pushing about 3,800 pounds, it should be capable of 185 mph. The SWB was also modelled extensively with CFD tools to ensure high-speed stability.

The noise is rather nonstandard. Mallock wanted the classic V-12 howl at high revs: high-pitched, multi-layered, and pure. Funnily enough, the 550 Maranello is relatively quiet, and it tends to be rather boomy and unpleasant when fitted with a sport exhaust, providing a flat blare instead of a complex symphony. The RML 250 SWB remedies that problem and then some. Maybe it’s not as nape-prickling as a real SWB on a qualifying lap at Goodwood, but it’s still rather inspirational. Only a true EVangelist could resist.

We’re at Millbrook Proving Ground on the infamous Alpine Hill Route. It climbs and heaves and drops like a rollercoaster, and the RML 250 SWB feels easy and intuitive. The steering is perhaps a shade too light, but it pulsates gently with feedback. The structure feels stiff and modern, yet the suspension’s fluidity is something different. Not classic, exactly, but certainly more focused on feedback and weight transfer and a sort of natural athleticism than any modern GT or sports car or, indeed, a Ferrari 550 Maranello fitted with the Fiorano handling pack. Give the V-12 its head, and the hood rises up and hauls at the horizon; feed the car into turns, and the SWB takes a moment or two to settle. Pitch and roll are well controlled, and the car never feels lazy. But compared to something like a Mustang GT350R or a modern Porsche, it’s a much more easy-going machine. The driver really dictates how the SWB behaves, and the sense of control is bewitching.

Dynamically, the car is fully engaging, but there’s so much more. Glance in the side mirrors, and you catch a glimpse of the beautiful rear haunches. They’re carbon fiber, of course, but just as evocative as the aluminum originals. In fact, the entirety of the SWB’s two-piece clamshell body is carbon fiber, providing additional stiffness over a 550 and saving considerable weight. RML admits a full carbon-fiber chassis would be ideal, but in order to sell the 250 Short Wheelbase around the world and satisfy regulations, it needed to retain the bare minimum of the donor 550 Maranello.

Anyway, those haunches. And the physical, precise gearbox. The noise. Rich and cultured, and thanks to relatively short gearing, you get to hear it build into a singular, piercing V-12 shriek over and over. Or you can just select third or fourth gear and ride the torque. Beautiful is the fact you can hustle the Shorty one minute, calmly guide it the next, and feel totally absorbed either way. Some will crave more performance; others might want the genuinely lightweight feel of an old road racer or a more traditional restomod based on a tiny, waif-like Porsche 911. We get that. But we also now get the RML 250 Short Wheelbase, too. You could cover huge miles in it, revelling in the theater while appreciating the modern conveniences, the quality, the refinement, and the chassis’ malleable, supple feel. Here’s hoping the 30 owners don’t lock these cars away and miss out on a unique experience. The RML 250 SWB deserves a much better life than that.