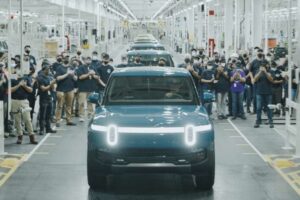 Rivian had quite a debut on Wall Street this week, with trading on opening day propelling it past the $100 billion valuation, making it the second most valuable automaker in the US after Tesla. The EV maker’s stock opened at $78 a share on Wednesday and closed at $100.73 later in the day, representing one of the biggest opening day gains seen in years, propelling it past Ford and GM’s market values—while also flashing back to Nikola’s own brief market triumph over Ford in 2020.

The market debut was made all the even more dramatic given the fact that Rivian has started production of its R1T electric truck just weeks ago, for which it has 55,000 pre-orders, but does not expect profitability for some time. It also doesn’t expect its delivery numbers to top those of decades-old automakers that have a far more modest market valuations. In fact, Rivian expects a $1.275 billion net loss in this quarter alone. So just how much overlap there is between the world of trading stocks and the world of actually making EV for customers remains to be examined, given the giddy state of the EV start-up landscape on the financial markets.

“I think Rivian’s IPO is a clear sign of the direction in which industry, investor, and consumer priorities are heading: electrification,” Robby DeGraff, industry analyst at AutoPacific told Autoweek. “What makes the number so staggering is that Rivian’s only just started to roll out the first examples of their very first finished product, the R1T…whereas storied legacy automakers that have been around forever (some over a century) with fully established lineups of product and dramatically more sales are trailing behind that colossal valuation.”

The cash generated by the IPO will come at a crucial time for the EV maker, which has posted a loss of $994 million in the first half of the year. More cash will be needed to ramp up production, before Rivian will start making a dent in those 55,000 truck orders. The EV maker expects to burn though even more cash next year. 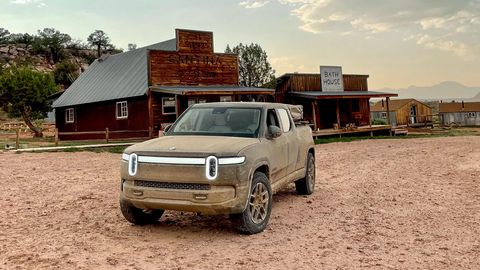 “We have generated significant losses from our operations as reflected in our accumulated deficit of $1.7 billion and $2.7 billion as of December 31, 2020, and June 30, 2021, respectively,” Rivian noted in its prospectus. “Additionally, we have generated significant negative cash flows from operations and investing activities as we continue to support the growth of our business. We anticipate our cumulative spending on capital expenditures to be approximately $8 billion through the end of 2023 to support our continued commercialization and growth objectives as we strategically invest in infrastructure, including additional manufacturing capacity, battery cell production, service operations, charging networks, experience spaces, and software development.”

An even bigger order—the one that is giving investors more optimism at the moment—is the 100,000 delivery van order from Amazon through 2030, which also happens to be one of Rivian’s financial backers (along with Ford). So the R1T pickup and the R1S sport utility, while important to the public image of the company—especially as the truck has beaten Tesla’s Cybertruck to production by a whole year—represent just two components of Rivian’s planned production in the near term.

“There’s a long road ahead for Rivian, and its $12 billion or so in funding will help them upshift into the next year,” DeGraff added. “More product needs to be sold and delivered to customers, but in order for that to happen a new assembly plant really needs to get up and running because capacity at the Normal, Illinois, plant is limited. Remember they’ve got a delivery van they need to build too for Amazon (whose partnership definitely attributed to the sky-high valuation) and beyond, all under the same roof. Additionally, that funding will likely be used for the expansion of Rivian’s portfolio. We know there are more models on the way, some of which will likely be in need of a new platform. Any time a new platform enters the picture it can be a fortune to develop, and they don’t just take shape overnight.”

Rivian’s market debut is also unfolding at quite a favorable time for the market and its appetite for things electric, if Tesla’s recent surge past the $1 trillion mark is any indication. Whether Rivian’s debut is taking place at a favorable time for the auto industry is a different question, as most automakers are currently beset by chip shortages and have dialed back expectations of financial performance before the end of the year.

Rivian is headed for plenty of choppy waters as well in the coming quarters.

“We expect to operate at a negative gross profit per vehicle for the near term as our fixed costs from investments in vehicle technology, manufacturing capacity, and charging infrastructure are spread across a smaller product base until we launch additional vehicles and ramp production,” Rivian noted in its prospectus. “This dynamic will cause our gross profit losses to increase on a dollar basis even as our revenue increases from ramping production volumes over the short to medium term.” 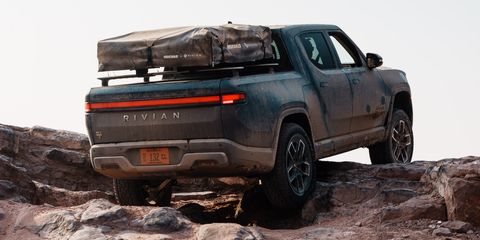 When it comes to the vehicle that has attracted the most attention thus far, the R1T pickup, the model will face some significant competitors in just a few months, as production of the Ford F-150 Lightning begins in the spring, to be followed shortly by GM’s electric Chevrolet Silverado in 2022. The Cybertruck, lest we forget, is also expected to enter production next fall. And Rivian’s R1S sport utility, production of which is expected to start later this year, already faces no shortage of competitors at home and overseas, ones that are now arriving with some regularity.

Whether Rivian will be able to peel off a lot of those buyers in the longer term still remains to be seen. By this time next year it won’t be the only EV maker offering pickups, but will likely be one of five brands with EV trucks in production.