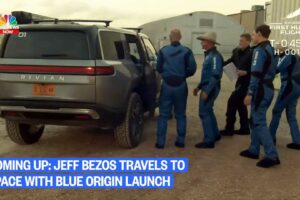 Rivian was part of the history made today as Blue Origin launched its first crewed craft, the New Shepard, briefly to space. The flight passed the Kármán line – 100 kilometers above the Earth’s surface – which is seen as the boundary between our atmosphere and outer space.

To get to the launch pad, Blue Origin’s founder Jeff Bezos, his brother Mark, Oliver Daemen, and Wally Funk took a ride in an SUV that has its own rocket-like attributes: the Rivian R1S. While it didn’t perform a 3-second zero-to-sixty run while taxiing the crew to the space ship, it did do something even more important.

With millions of people watching the spectacle live, the soon-to-be astronauts loaded into the R1S as the Rivian brand got a mention, at least it did on the livestream from NBC News that we watched. Unfortunately, after getting it right that first time, the announcers then switched to referring to the vehicle as a “Jeep,” which is, of course, a completely different and unrelated brand.

The SUV also carried a long object on its roof racks. Though it’s unclear what, exactly, it was, the color-matched container added a sense of utilitarianism to the vehicle’s look.

This is not the first time a Rivian vehicle has been on the scene of a high-profile Blue Origin event. Back in April, Bezos drove the R1T pickup truck to rendezvous with a capsule after it had been launched on a test flight.

The relationship between Bezos and Rivian is deep. Amazon, Bezos’ bigger, more famous company was an early investor in the automaker and have placed an order for 100,000 Amazon delivery vehicles. Those vehicles have already begun to hit the road in some areas, though high volume production is (still) expected to begin later this year.

Sadly, production of the Rivian R1T and R1S was just pushed back again. Now, anxious customers are being told they will need to wait until September before initial deliveries begin. While that is most definitely disappointing to the thousands who put down deposits for their reservations, some as early as December of 2019, they can take at least some solace knowing the reputation of the brand they’ve bet on is already being burnished.

If you’d like to see the Rivian vehicle in action, check out the livestream video below of the event. The electric SUV makes its debut about 2 hours and 10 minutes into the footage.