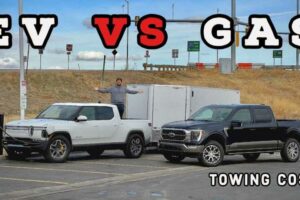 Towing with an electric pickup truck is a hot topic right now, but there’s not a lot of content out about that because there’s just one such model out now – the Rivian R1T. It has been the star of several tests that have shown the impact of towing on its range, but in this video, it’s all about the dollar sings.

Out of Spec Reviews’ Kyle Conner wanted to compare how much it costs to tow in the R1T versus a conventional gas-burning truck. For the comparison, he used a new Ford F-150 Powerboost hybrid, rated to tow slightly more than the Rivian (12,000 versus 11,000 pounds) and powered by a 3.5-liter twin-turbo V6 that together with an electric motor makes 430 horsepower and 570 pound-feet.

It is not as powerful as the Rivian, but the Ford still pulls its load well, helped by its electric boost. Kyle points out that the F-150 was actually not as surefooted and relaxing to drive as the R1T in this towing test, especially on the first leg of the loop when the vehicle faced a strong head wind; this is somewhat surprising given the fact that the R1T is smaller than the F-150.

This towing test was performed on a 57-mile loop with the Ford’s gas tank brimmed before and after the run in order to see exactly how much fuel it had used. The Rivian set off in the test with 80 percent in its battery, and it was charged to that level after the test.

They towed a V-nose box trailer with a Tesla Model 3 inside, well within their towing limits. When the numbers were crunched at the end of the test, the Rivian ended up being a few dollars cheaper, but only because Kyle put premium gasoline into the Ford, even though it was not required.

If the charging was done at home, where rates are considerably lower than at public chargers, then the cost difference would have been far more noticeable. So the answer, based on the experience gained in this test would be yes, towing is cheaper with an EV.