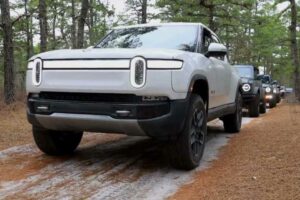 We’ve never really been surprised to see videos of the highly capable Rivian R1T electric pickup truck tearing it up in some of the toughest conditions. Rivian calls it an “Adventure Vehicle,” and it certainly lives up to its name, and then some. However, there are still people who may question the R1T’s off-road prowess when compared to tough rivals, such as the legendary Jeep Wrangler and the new Ford Bronco.

The short video above got our attention almost immediately. Simply having the title “Rivian & Bronco Off Roading” was more than enough to pique our interest. However, sadly, when we played it, we realized it was only two minutes long, and there are no details as to where the vehicles are hitting the trails, and why? Is this some sort of competition? Moreover, it’s not on the official YouTube channel for Ford, Jeep, or Rivian, so what gives?

“Hey everyone this is just a teaser. I’m working on a full edit and showcasing more of the Rivian and the Broncos. Hands Down the Rivian is a BEAST!! It is so capable of Off-Roading. It didn’t get stuck not once. Rivian R1T is built for this life. Broncos are more than capable when the driver knows what he’s doing of course :o).”

It’s true, the R1T crosses several deep-water off-road areas without even skipping a beat. Meanwhile, there’s footage of a Wrangler and a couple of Broncos needing to be pulled out after getting stuck. You really have to see it to believe it, and we can only imagine what the full video may reveal.

YouTube channel Shadi Sells Cars points out the R1T’s built-in air compressor, which makes it easy to air down your tires on the trails and then reinflate them when you’re ready. He also mentions the electric pickup truck’s roomy and versatile storage areas.

The more we learn about the R1T, it really seems to be a true gem for people who are into camping and Overlanding. It’s also quicker than most vehicles on the market today, and a blast to drive on and off the pavement, which arguably can’t be said about many of today’s off-road-ready rivals.

We’ll be keeping a close eye out for the full video so that we can share it with you once it’s published. In the meantime, enjoy the entertaining teaser and leave us a comment. What do you think of the Rivian R1T’s performance?