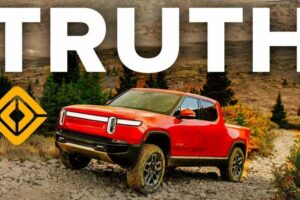 Almost exactly one month ago, we told you about a Tesla owner who decided to buy a Rivian R1T electric pickup truck. Essentially, the video was about why he bought the R1T, so we had the impression he was going to show off the truck. However, even though he “bought” an R1T, he hadn’t yet taken delivery. Now, he has his brand-new truck on hand.

We’re talking about YouTube influencer Ryan Shaw, who has owned a Model Y crossover, two Model 3 sedans, and a Model S Plaid. Shaw still owns some of the vehicles and rents them out of Turo, and now he has officially added the Rivian R1T to the mix. It will be interesting to learn whether he’ll follow through with putting the electric pickup truck up on Turo, as there’s likely a growing demand for it.

At any rate, the video above is Shaw’s first video sharing the truck publically. He provides details about his original order, price, and timeline, the R1T delivery experience, as well as his first impressions thus far. For the most part, Shaw’s initial feeling about the electric truck seems to be quite positive, though it’s not without its faults.

When we watch videos like this, we pay close attention to whether an owner is actually referring to outright problems or issues with the vehicle, or just things they’d change. Since Shaw is coming from a host of Teslas, there are certain things he’d like to see done differently, but he’s still about as impressed with Rivian and the R1T as he was initially. He says that among the growing number of EV startups, Rivian has kept his attention and is one of the few that’s actually delivering.

Shaw ordered his Rivian R1T in December 2021, assuming it would take forever to get. However, fortunately, he already took delivery. His goals when ordering the truck were to “get one for the channel,” obviously to share it with his audience. He also planned to use it as a daily driver and a Turo rental. Now that Shaw has his unique and pricey electric pickup on hand, do you think he’ll resort to renting it out?

At this point, we’ll leave you to watch the video. As usual, Shaw does a stellar job of showing off the truck and filling us all in on its features, performance, and overall ins and outs. Words don’t do it all justice, and Shaw has the eye candy and smooth talking to keep you engaged. Once you had a chance to watch the video, be sure to leave us a comment.

What do you think of the Rivian R1T? Do you prefer it over the Ford F-150 Lightning, or perhaps you’re waiting for a Tesla Cybertruck?