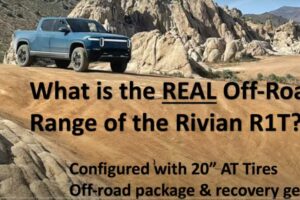 Rex Briggs is a data scientist and now the owner of a Rivian R1T used his skills to try to calculate the real-world off-road range of his electric truck. He took it on the Coyote Flat off-road trail in California’s Inyo National Forest all the way up to Funnel Lake and then back to the start.

This was a journey of around 100 miles, which Rex started with 93 percent in his R1T’s battery pack. He reached Funnel Lake with 65 percent in the battery, after some 10 creek crossings, climbing to 10,300 feet above sea level with the kind of ease that we now know this vehicle can deliver in tough conditions; this trail is not particularly difficult and it didn’t really challenge the R1T, but it’s still definitely a good test.

In his calculation that he had used 37.8 kWh to reach the lake, he considered that the Rivian’s battery pack had 135 kWh usable capacity, which it doesn’t. Our own Tom Moloughney and Kyle Conner measured this in another video and found that the usable capacity of the big Rivian battery is actually around 125 kWh, which means Rex actually used a bit less electricity to complete the climb than what he sates.

He is made aware of this in the comments and then calculates that with 125 kWh, the Rivian could have done around 137 miles of driving in those conditions. It’s worth noting that he obviously used most of the electricity on the first leg of the journey, going uphill, and then used hardly any at all on the descent.

Now even if this result is still a pretty good rough indication of how much you can actually drive one of these Rivian trucks off-road, a test would probably need to be performed on a more flat trail and that could yield a different result. This calculated range is only really accurate for a trail with a similar altitude change to this one, so more (and more diversified) testing still needs to be performed.