Rivian R1T: How Does It Handle Death Valley National Park? 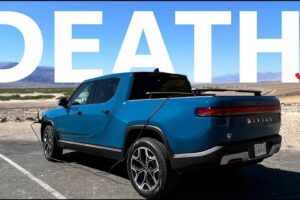 The Rivian R1T is an “Adventure Vehicle,” so Death Valley National Park should be a piece of cake, right? There’s really no reason an EV shouldn’t be able to handle Death Valley, and this is especially true of an off-road-ready electric pickup truck. However, there are always unexpected hurdles, and in this case, while the R1T did have a weird issue with its brakes, the main problem wasn’t actually related to the truck itself.

Just last week, we shared a video with you from YouTube influencer Jehu Garcia. It was essentially just a rundown of his impressions after owning his R1T for 10 days, during which he racked up his first 1,000 miles. If you didn’t get a chance to watch it, it’s linked near the bottom of this article.

In the previous video, Garcia noted that almost as soon as he took delivery of his Rivian electric pickup truck, he took it on a road trip. He figured that the best way to determine whether or not he was impressed with the R1T was to hit the road and put it through the paces.

Before Garcia sets out on his trip, he installs some Rivian-branded cargo racks, charges the truck, and shows various shots of it next to other trucks to give us an idea of its size. He also attempts to install a tent, though the only one he could get in time doesn’t end up fitting on the truck. There’s a whole lot more in the first part of the video related to charging, and some of it is quite unique. Garcia even has an extra battery pack that he put together himself with scooter packs.

At any rate, Garcia heads into Death Valley National Park for some camping with his family. We will tell you that the auxiliary battery pack doesn’t work out as planned, since the inverters overheated. Moreover, a lack of well-located and properly working fast-charging infrastructure is the biggest issue.

Garcia makes it very clear that he’s been spoiled by Tesla’s Supercharger network, and that fast-charging infrastructure still has a long way to go before it will suffice for trips like this. It’s sad to think that it may not be possible to drive a non-Tesla EV between Nevada’s two largest cities, depending on various factors.

With all of that said, you’ll be hard-pressed to find a video about the Rivian R1T with such a varied amount of information and cool footage. Give it a watch, and then start a conversation in our comment section below.