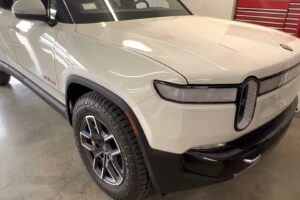 YouTube influencer Average Car Guy provides a detailed look at the Rivian R1T, with a focus on the electric pickup truck’s paint quality, panel alignment, and overall exterior fit and finish. He notes that he’s had a lot of questions on Rivian forums about the truck’s paint quality. Is it worthy?

Rivian just brought the R1T electric pickup truck to market in September 2021. While the company is “new” to many folks, it has actually been around for many years. Still, Rivian is one of just a few arguably successful startup automakers that’s focusing solely on electric vehicles. For this reason, it only makes sense to take a very close look at its trucks’ build quality and fit and finish.

Tesla has been under the microscope for years due to the fact that its expensive “luxury” vehicles aren’t on par with German luxury rivals. This applies to not only Tesla’s interior design and materials, but also to the cars’ paint, panel alignment, interior trim fitment, and overall build quality.

Some folks will argue that most cars have issues with panel alignment, paint, and interior fitment, though they’re just not scrutinized as often or as closely as Tesla’s models. Others insist that Tesla has some of the poorest fit and finish in the industry. Moreover, experts like Sandy Munro have pointed out that while Tesla’s vehicles were certainly lacking in the past, the company has come a long way.

Now that EV startup brands like Lucid and Rivian have brought their first vehicles to market, it’s time to take a closer look at these Tesla rivals to see if they’re faring better in the build quality department.

The video points out plenty of orange peel on the R1T’s paint, though it’s not obvious without very close inspection. However, if you do look closely, it’s on every panel of the vehicle, and the owner says the R1T has more orange peel than any other car he’s ever owned.

If you’re not familiar with orange peel, it has nothing to do with the color, but rather, the skin of the fruit. Essentially, automotive paint can dry with a texture that’s not smooth. You can see it at 2:40 in the video above. It’s even more obvious on the truck’s door handle, which you can see beginning at 5:45 in the video.

There’s also a coin-sized ding on the truck’s frunk lid. While it’s obvious at the right angle and in the right light, most people probably won’t notice it without looking for it. As far as panel gaps are concerned, spacing is consistent and alignment is excellent in most cases. However, the charging port door and the driver’s side door handle both seem to sit a bit deeper than they should.

In the end, Average Car Guy admits that he’s not too concerned with any small fit and finish issues on the R1T. He says that if you really pay close attention, you could probably expose all sorts of reasons not to enjoy the things you own.

Interestingly, it seems some video viewers tend to feel the same. One notes that they’d be much less concerned about a bit of orange peel than obvious panel gaps or other defects.

What’s your take? Are people playing too much into this whole paint and panel gap situation? What would irk you more? Should people expect more of these expensive EVs? Start a conversation in the comment section below.