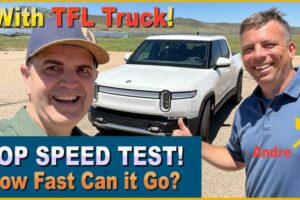 There’s not really any good reason a pickup truck needs to have a ridiculous top speed unless you plan to spend some time at the track. However, in order to prove to the masses that electric vehicles are highly capable, top speed is arguably important, and it’s much more impressive when it’s demonstrated with a pickup truck rather than a sports car.

When people talk about electric vehicles, they tend to focus on instant torque and/or quick off-the-line acceleration. EVs accelerate immediately and seamlessly, there’s no engine prep or internal combustion or spooling or really anything that needs to take place for an EV to launch instantly.

People tend to avoid talking about top speed and endurance when touting an EV’s performance. This is because electric vehicles don’t typically have top speeds as high as performance-oriented gas-powered cars, and the gas cars may deliver stronger acceleration at higher speeds. It has also been proven in at least some cases that gas cars have more staying power than electric cars, though it seems EV makers have made much progress in ensuring that their vehicles don’t peter out early.

With all of that said, the guys over at The Fast Lane Truck invited Rivian Dad and his R1T (affectionately named Rocky the Rivian) to a closed airport runway to race against a Ford F-150 Lightning electric truck. Rivian Dad ran four sprints on the runway to see just how fast he could get the R1T to go. According to Rivian, it tops out at 115 mph.

The full drag race between the Rivian R1T and Ford F-150 Lightning was published on The Fast Lane Truck YouTube channel. We’ve embedded it below for your enjoyment. The video also features a Ram TRX, and you get to see TFL’s Roman hit 116 mph in the R1T. Once you’ve watched both videos, scroll down and leave us a comment.